The bandh is observed day after Telangana HC set ultimatum for state transport corporation and employees' unions to settle all disputes. 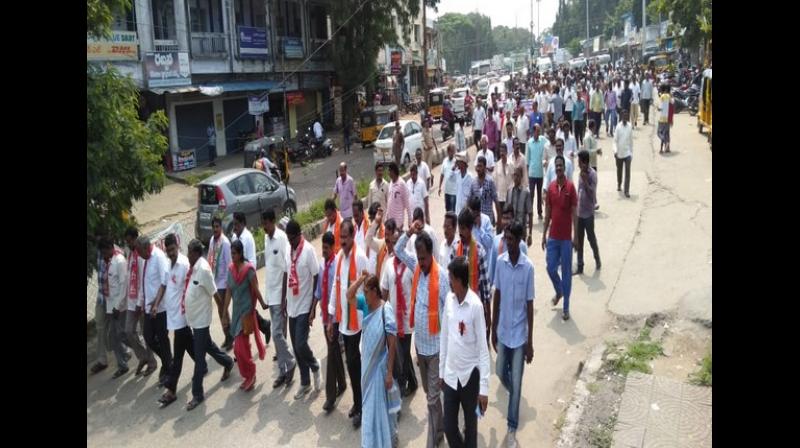 The state-wide bandh called by the striking employees of TSRTC pressing various demands, including merger of the corporation with the Telangana government, began on Saturday with the opposition parties actively supporting it. (Photo: File)

Hyderabad: The state-wide bandh called by the striking employees of TSRTC pressing various demands, including merger of the corporation with the Telangana government, began on Saturday with the opposition parties actively supporting it.

The bandh is being observed a day after the Telangana High Court set an ultimatum of October 28 for state transport corporation and employees' unions to hold talks and settle all disputes.

Meanwhile, the agitation by the employees of Telangana State Road Transport Corporation (TSRTC) that has badly affected bus services across the state, entered the 15th day on Saturday.

The RTC has been operating services with temporary drivers and conductors.

According to RTC sources, bus services were being operated in consultation with district Collectors and Superintendents of Police in view of the bandh.

All major opposition parties have announced plans to organise protests during the day.

TDP and Telangana Jana Samiti (TJS) claimed that its leaders were shifted to different police stations in the city when they tried to stage protests at the Jubilee bus station in the morning.

Besides political parties, state government employees, trade unions, sections of advocates and student unions have extended their support to the bandh.

Different employees and workers unions of TSRTC began the indefinite strike from October five across Telangana on a call given by the Joint Action Committee of RTC, demanding the corporation's merger with the government and recruitment to various posts, among others.

Ruling out discussions with the agitating unions, the TRS-led government hadtermed the stir as "illegal" as it caused immense inconvenience to the public.

Since the strike began on October 5, two employees have ended their lives and three attempted suicide.