The home minister assured the J&K chief minister of all possible assistance from the Centre in maintaining peace in the state. 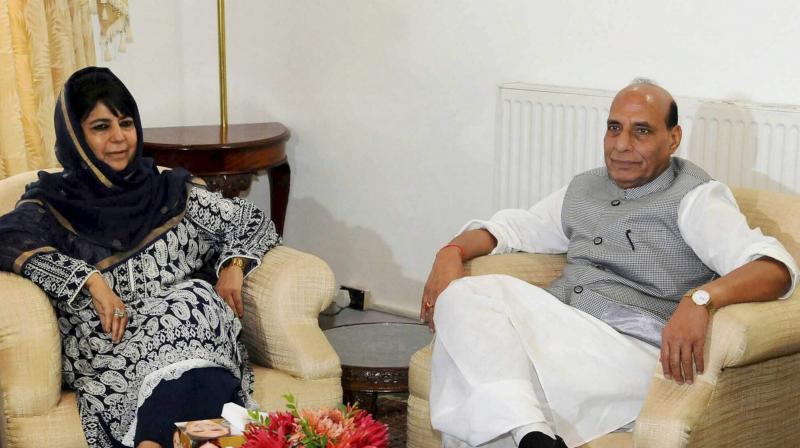 New Delhi: Jammu and Kashmir chief minister Mehbooba Mufti on Wednesday held detailed discussions with Union home minister Rajnath Singh on Wednesday on the security situation in the Valley, particularly in view of the recent increase in violence.

During the meeting which lasted for almost 30 minutes, Ms Mufti shared details of the prevailing situation in the state, including incidents of braid-chopping in some parts of the Valley which has even led to violent incidents in some places. She also informed the home minister about various measures being taken to maintain law and order.

The home minister assured the J&K chief minister of all possible assistance from the Centre in maintaining peace in the state.

The Valley has witnessed violent incidents like attacks on security personnel, killing of a PDP worker followed by an attack on his house and throat slitting of a teacher.

On Wednesday, four persons were injured when security forces opened fire at a mob in Pahalgam area following an alleged incident of braid chopping. Among other issues that came up for discussion during the meeting was forming of a study group by the home ministry to look into problems being faced by the people living in border areas in J&K. The committee would submit its recommendations to the Centre and what corrective measures need to be put in place.

The home minister had recently said five to six terrorists were being killed by security forces in the Valley everyday. Centre has also directed security forces to launch a massive operation against some of the top militants active in the region.