Prime Minister Modi will first reach France on August 22-23 for a bilateral visit. 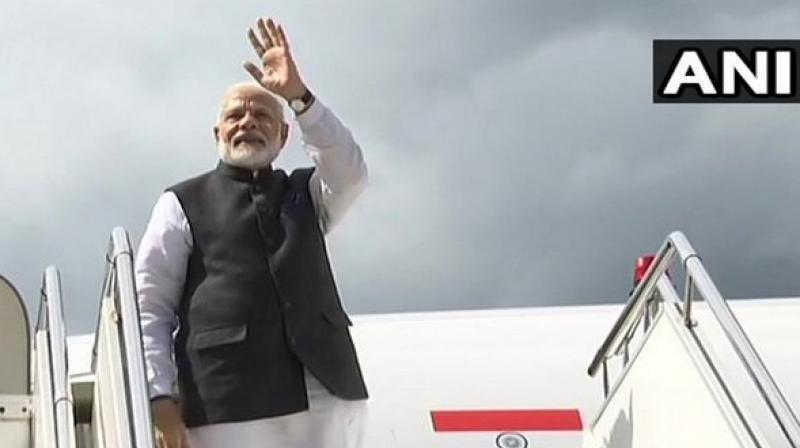 The Prime Minister will receive the Order of Zayed, the UAE's highest civlian honour that was conferred on him in April for boosting bilateral ties. (Photo: File | ANI)

New Delhi: Prime Minister Narendra Modi will embark on a three-nation tour of France, UAE and Bahrain from August 22 and also attend the outreach session of G-7 meeting at Biarritz in France in which he will focus on how India has been approaching issues of climate change and biodiversity while also showcasing how it has used technology to boost inclusive development.

Prime Minister Modi will first reach France on August 22-23 for a bilateral visit during which he will discuss defence cooperation and regional and global issues with President Emmanuel Macron.

From France, he will travel to the UAE and meet Crown Prince of Abu Dhabi Sheikh Mohammed bin Zayed Al Nahayan. The two leaders are expected to discuss bilateral, regional and international issues of mutual interest.

The Prime Minister will receive the Order of Zayed, the UAE's highest civlian honour that was conferred on him in April for boosting bilateral ties.

Briefing reporters about the visit, T S Tirumurti, Secretary, Economic Relations, Ministry of External Affairs, on Monday said the award assumes special significance as it was conferred on Modi on the birth centenary year of Sheikh Zayed.

He said Modi's visit to Bahrain will be the first by any Indian prime minister to the country. He will meet Bahrain Prime Minister Prince Khalifa bin Salman Ali Khalifa and discuss bilateral and international issues.

After these visits, Modi will head back to France to take part in the special outreach session of G-7 summit in Biarritz, which will have discussions related to climate change, biodiversity, digital development, and artificial intelligence.

"So naturally that would be the focus of Prime Minister's interventions. He will be focusing on how India has been approaching these issues domestically, and what more we can do both domestically and internationally in partnership with G7 countries," he said.

Reddy said in terms of digital transformation, India has been showing the way how digital technology can be used to improve governance and make it more inclusive.

Referring to JAM (Jan Dhan-Aadhaar-mobile), he said it was an example of how technology is being used to meet the development needs and aspirations of people for better governance.

"That would also be showcased in the session. In addition to what artificial intelligence is going to be impacting in the times to come and how it needs to be people-oriented and people-centric in terms of its development," he said.