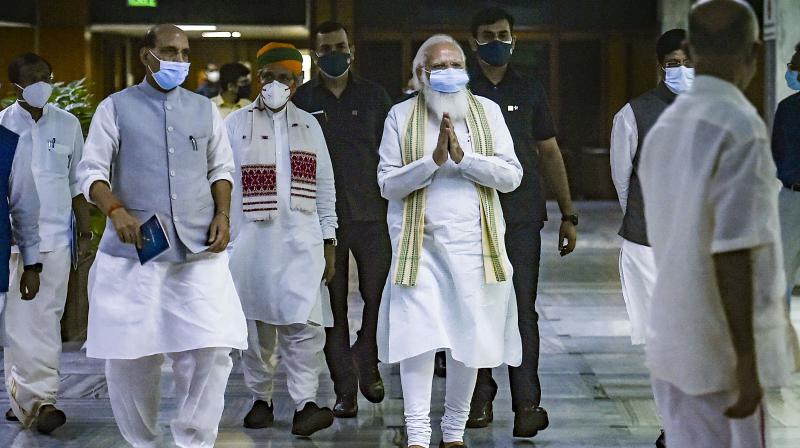 New Delhi: A day before the start of Parliament’s Monsoon Session, Prime Minister Narendra Modi chaired an all-party meeting Sunday, where he said that all representatives’ suggestions, including those from the Opposition, are very valuable. The PM further said “healthy and fruitful debates” should take place in Parliament, adding the government was ready to hold discussions on any subject if raised under the parliamentary rules and procedures. The meeting was attended by more than 40 leaders of 33 parties, said parliamentary affairs minister Pralhad Joshi. The Monsoon Session will continue till August 13 with all pandemic-related protocols in place. On the first day of the session, the PM will introduce the newly inducted ministers to both Houses.

At the meeting, the Opposition parties objected to the government’s offer of a joint address by the Prime Minister on the Covid-19 situation to the MPs of both the Houses on Tuesday in the Parliament House Annexe, alleging it was another way of bypassing parliamentary norms.

At the meeting, the parliamentary affairs minister announced that Mr Modi will address the MPs of both Houses on July 20 and speak on the Covid-19 pandemic.

“Parliament is in session. Come to the floor of the House,” said TMC Rajya Sabha MP Derek O’Brien, who attended the meeting. Sources in other Opposition parties confirmed that the leaders refused Mr Joshi’s offer and some even suggested a joint sitting of the two Houses in Central Hall.

Some new members who recently entered the Lok Sabha following the byelections would also take the oath as members of the Lower House on Monday. At the meeting, the Opposition parties raised the crucial issues of the farm bills, price rise -- especially of petrol and diesel -- and also demanded that the government bring in reservations for OBCs in NEET.

The government also informed the floor leaders it had listed a number of bills, including five ordinances, and other bills, totalling up to 29.

From the Congress, Mallikarjun Kharge and Adhir Ranjan Chowdhury --its leaders in the Rajya Sabha and Lok Sabha respectively -- attended. The floor leaders of all prominent Opposition parties, including Derek O’Brien from Trinamul Congress, Tiruchi Siva of DMK, Ram Gopal Yadav of the Samajwadi Party leader and Satish Mishra of the BSP were also present.

The Monsoon Session is likely to be a stormy one as the main Opposition party, the Congress, is ready with ammunition. In the Congress internal meeting, the party decided to take on the government on the issues of inflation, fuel price hikes, the situation on the borders of the country and the alleged mismanagement in the Covid-19 second wave. The Congress also plans to raise the issue of the alleged irregularities in the purchase of Rafale fighter jets as an inquiry is currently going on in France.

At the Congress MPs’ meeting, the party decided it would bring in an adjournment motion in both Houses of Parliament on the controversial farm laws, besides raising other issues. Several other Opposition parties, including the SP and BSP, are likely to give issue-based support to the Congress on several issues.