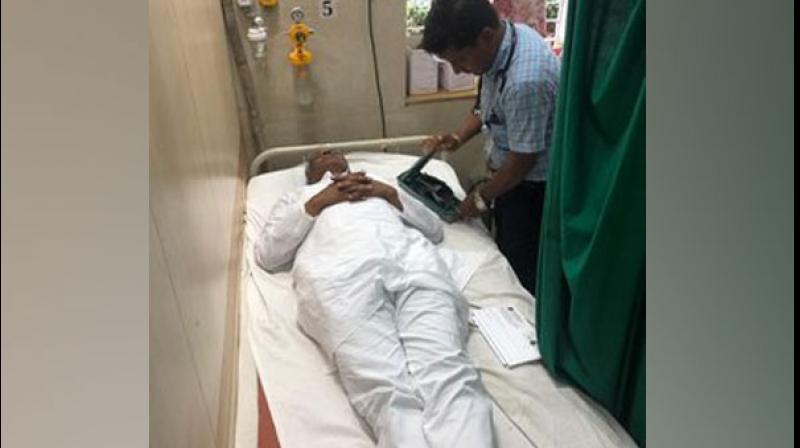 Patil had said he travelled to Chennai for personal work and later to Mumbai on the advice of a doctor after he developed chest pain. (Photo: ANI)

Mumbai: Mumbai Police on Friday allowed Karnataka cops to take the statement of Congress legislator Shrimant Patil, who was admitted at a hospital following chest pain.

"Permission has been given to Karnataka Police officials to meet and take the statement of Congress MLA Shrimant Patil," a Mumbai police official said.

On Thursday, the Karnataka Congress had claimed that the BJP "abducted" its MLA Shrimant Patil, ahead of the trust vote of Chief Minister HD Kumaraswamy-led government.

However, the legislator had said he was in Mumbai for treatment and would return to Bengaluru only after recovering completely.

Karnataka Congress had approached the Bengaluru Police alleging Patil was "abducted" by BJP MLA Laxman Savadhi in order to dethrone the Kumaraswamy-led government in the trust vote.

The Congress had alleged that Patil was deprived of his right to vote, "which is a serious act and also a cognisable offence which needs immediate necessary action to protect" Patil.

However, Patil had said he travelled to Chennai for personal work and later to Mumbai on the advice of a doctor after he developed chest pain.

"I went to Chennai for some personal work. After reaching Chennai, I felt some pain in my chest. But after visiting the hospital, I came to Mumbai on the suggestion of the doctor and got admitted here. On doctor's advice, I will return to Bengaluru once my health improves," said Patil, who was among the 18 MLAs absent during the motion of confidence yesterday.