It’s not coming out of heaven: Pranab Mukherjee on USD 5 trillion economy

He was speaking at an event at the Mavalankar Hall, Constitution Club of India in the national capital on Thursday. 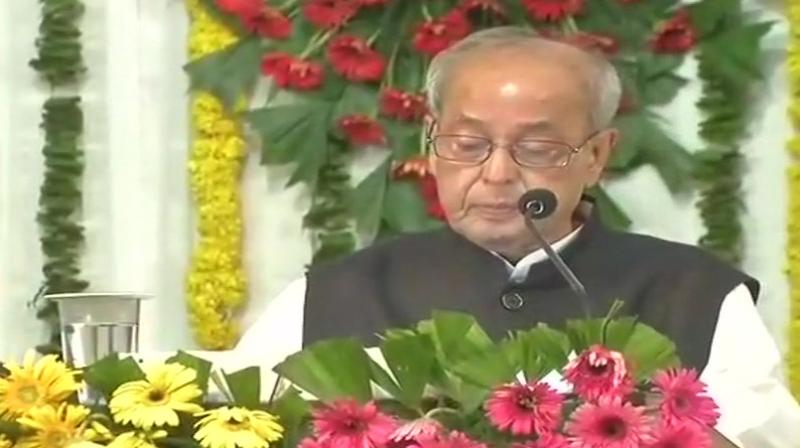 Former president Pranab Mukherjee said that the foundations of modern India were laid by its founders who firmly believed in a planned economy, as opposed to today, when the Planning Commission has been disbanded. (Photo: File)

New Delhi: Former president Pranab Mukherjee said that the foundations of modern India were laid by its founders who firmly believed in a planned economy, as opposed to today, when the Planning Commission has been disbanded. He was speaking at an event at the Mavalankar Hall, Constitution Club of India in the national capital on Thursday.

"Those who criticise Congress rule for 55 years are ignoring where India was at independence and how far we have come. Yes, others also contributed, but the foundations of modern India were laid by our founders who firmly believed in a planned economy, as opposed to today, when the Planning Commission has been disbanded," said Pranab Mukherjee.

"Those who criticise Congress rule of 50-55 years, they forget that from where we began and where we left. If the Indian economy is to be built to USD 5 Trillion, we left a strong foundation of USD 1.8 Trillion from almost zero," he said.

He said that foundations for India to become a 5 trillion-dollar economy in the future were laid by previous governments including that of Jawaharlal Nehru, Manmohan Singh and Narasimha Rao.

"Finance Minister, while presenting the budget, had said that by 2024 India's economy will reach USD 5 trillion. It isn't coming out of heaven. There's a solid foundation and the foundation has been built not by Britishers but by Indians after Independence," he said.

"India has grown in leaps and bounds because Jawaharlal Nehru and others established IITs, ISRO, IIMs, banking network etc. This was built upon by Dr Manmohan Singh and Narasimha Rao when they liberalised the economy. That unleashed India's economic potential. It is on that foundation that the Finance Minister can claim today that India will be a 5 trillion dollar economy," he said.

He further said that public discourse should be free from all forms of violence.

"To avoid the social and political distortions and deviations that are happening in India today, we need to engage in an honest dialogue to understand the problems that our polity and people face today. We must also free our public discourse from all forms of violence, physical as well as verbal. As our founders once did, we need to zealously safeguard, and further the promise of India," he said.

"India's Constitution has secured socio-economic equality for all, irrespective of their religion, caste, gender and birth. It secured religious tolerance and secularism. Safeguarding minority rights, our founders also secured affirmative action and the cultural and educational rights of minorities. India's promise also pledges the right to form associations, freedom of expression of thought, the abolition of untouchability, universal adult franchise, inclusive industrial development, and socialism. It is largely because of this vision that India was able to defy the pervasive scepticism about its survival," he said.

The former President launched Samruddha Bharat's monthly lecture series, Manthan, which will host India's foremost policymakers, academics, and activists to engage in a dialogue on ways to safeguard and further the constitutional idea of India.