Addressing a “farewell” press conference later, Mr Naidu played down reports that he was not very keen on taking the new responsibility. 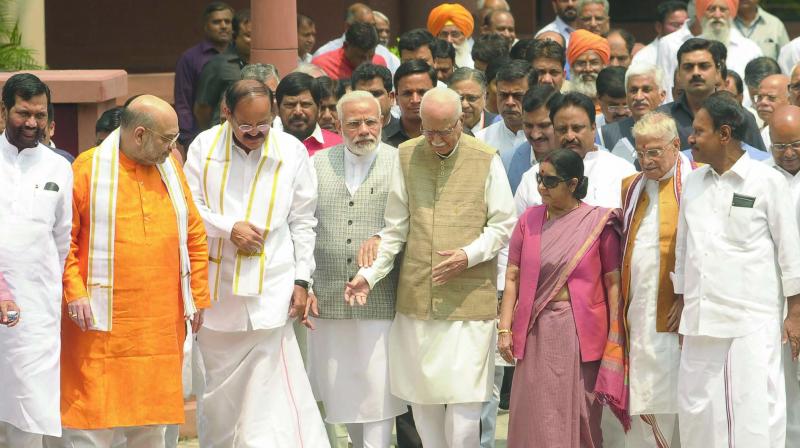 New Delhi: The NDA’s vice-presidential nominee M. Venkaiah Naidu on Tuesday filed his nomination and reached out to parties across the political divide, saying he no longer belonged to the BJP and would work to strengthen democratic institutions if elected.

Joined by Prime Minister Narendra Modi, BJP chief Amit Shah and party veteran L. K. Advani, besides allies and members of non-NDA parties like AIADMK and TRS, the former Union minister submitted his nomination papers for the election scheduled for August 5. Tuesday was the last day for filing nominations.

Addressing a “farewell” press conference later, Mr Naidu played down reports that he was not very keen on taking the new responsibility.

He said the NDA making him its nominee was, in fact, an “honour” and that he would uphold the dignity of the office if elected.

He said he wanted to see Mr Modi’s return to power in the 2019 Lok Sabha elections and then join social service but “destiny decided otherwise”.

Mr Naidu, who quit the BJP after he was nominated to contest the vice-presidential poll, suggested he was keen on strengthening Mr Modi’s “great leadership” but rejected reports that he wished to continue as minister.

“The country has got a great leadership and we should strengthen the country through that leadership, and move forward. That was my wish. There was no intention as some people are saying that I wanted to continue as minister...,” he said.

“I had already made up my mind. I told my colleagues also that I want to see Modi come back again in 2019 and then I will call it off and join social service... But destiny decided otherwise. I have agreed with whatever decision was taken finally after discussion,” Mr Naidu added.

Having been “brought up” by the party after he lost his mother at a very young age, Mr Naidu said, it was “very painful” to leave the organisation that he treated like his mother.

He said he enjoyed working among people and in the party.

“The office of vice-president has a different profile. It has different norms of function... I hope I will be able to do justice,” Mr Naidu said, terming his nomination an “honour” for which he thanked the party leadership.

Noting that the vice-president’s office has been held by illustrious people like Sarvepalli Radhakrishnan, Zakir Hussain, M. Hidayatullah, R. Venkataraman, Shanker Dayal Sharma and Bhairon Singh Shekhawat, he said he would work to uphold the standards set by them.

“I am fully aware of the august responsibilities associated with the office. I would like to assure the people of the country that, on being elected, I will uphold the traditions and standards set by the worthy predecessors. I will uphold the dignity of the office of the vice-president,” he said.