A team from All-India Institute of Medical Sciences (AIIMS) is also likely to reach Muzaffarpur. 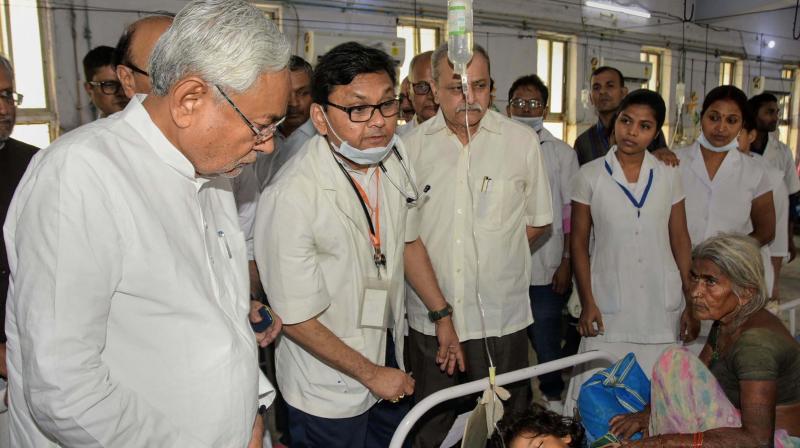 Patna: Bihar chief minister Nitish Kumar, who visited Muzaffarpur to review the situation, had to face protest by angry people amid sloganeering outside Sri Krishna Medical College and Hospital (SKMCH), where most of the children have died since the outbreak of acute encephalitis syndrome (AES) and brain fever.

According to officials, encephalitis has taken the lives of 108 children in Muzaffarpur alone.

A similar situation was also seen on Sunday when Union health minister Harsh Vardhan had visited Muzaffarpur to review the condition of children suffering from Acute Encephalitis syndrome and brain fever.

“Additional team of doctors is being sent from other hospitals to assist doctors at SKMCH Muzaffarpur,” Bihar chief secretary Deepak Kumar told reporters in Patna after Mr Kumar’s visit on Tuesday. He also said that “the state government will bear the transportation and medical expenses of patients suffering from AES”.

A team from All-India Institute of Medical Sciences (AIIMS) is also likely to reach Muzaffarpur.

Muzaffarpur, with a maximum number of cases, has been declared as the worst hit by the state health department. East Champaran, Vaishali and Sheohar are among other districts where encephalitis cases are rising. The outbreak continues to pose a tough challenge for the Bihar government. In the last 17 days, around 135 children have died in the state due to the disease.