An agriculturist and social worker, the low-profile leader has been in active politics from his student days. 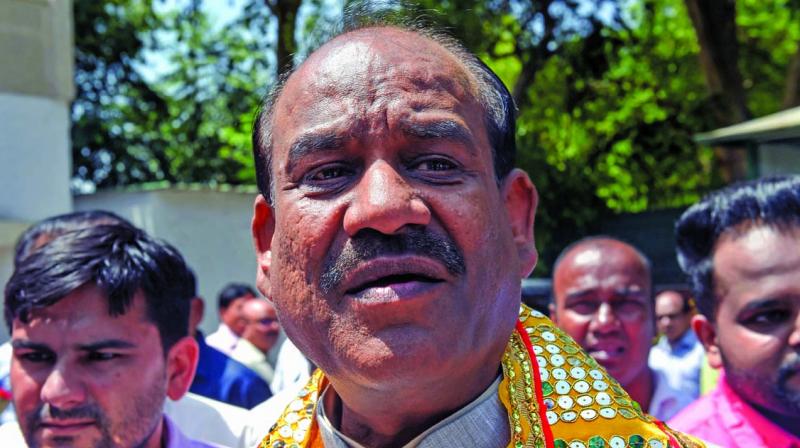 New Delhi: The BJP on Tuesday named its Kota-Bundi MP Om Birla, 57, as the ruling NDA alliance’s nominee for the post of Lok Sabha Speaker. The two-time MP from the parliamentary seat in Rajasthan is all set to succeed eight-term MP and BJP stalwart Sumitra Mahajan as even the Opposition Congress and its UPA allies decided to support his candidature. The election for the Speaker’s post is due to be held on Wednesday and Mr Birla, with 353 MPs in the NDA camp alone and some non-NDA parties like the BJD, YSRCP and AIADMK also backing his candidature, is all set to become the next Speaker. The Kota-Bundi MP is considered close to both Prime Minister Narendra Modi and BJP president Amit Shah, who is also now the Union home minister.

An agriculturist and social worker, the low-profile leader has been in active politics from his student days and served as state unit president of the BJP’s youth wing in 1991 and as vice-president at the national level.

While seniority is considered for the Lok Sabha Speaker post, there have been instances when first-time and second-time MPs have been elected for the chair. For instance, the Shiv Sena’s Manohar Joshi, who was elected Lok Sabha Speaker in 2002, was then a first-time MP. He succeeded TDP leader G.M.C. Balayogi, a two-time MP who died in a helicopter crash.

Starting his political journey as a student leader, the 57-year-old leader has also been elected to the Rajasthan Assembly for three consecutive terms in 2003, 2008 and 2013. He made his Lok Sabha debut in 2014 and was fielded again when he defeated Congress’ Ramnarayan Meena by a margin of over 2.5 lakh votes in the recently-concluded general election.

After his candidature was officially announced for the post, Mr Birla met Ms Mahajan to seek her blessings. “O.P. Birla is an old friend. I felt very good that he has been selected as the NDA’s candidate for Lok Sabha Speaker. He has earlier served as treasurer of the Indian Parliamentary Group. I have faith that he will handle his responsibilities at the Lok Sabha very well,” said the former Lok Sabha Speaker.