Mission to look into 'prakriti, pariyavaran': Modi on Kedarnath visit

The PM on Saturday offered prayers at the Himalayan shrine of Kedarnath, a day after campaigning for the ongoing polls came to a close. 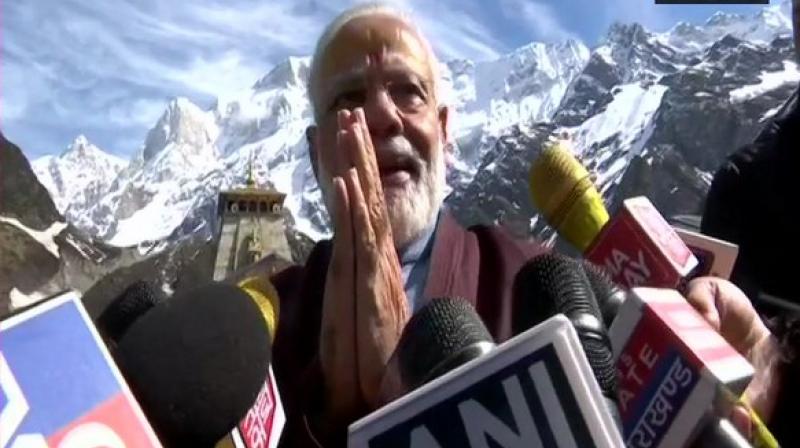 Prime Minister Narendra Modi on Sunday interacted with media and said his mission is to carry out developmental work in the region. (Photo: ANI)

Kedarnath: After offering prayers at Kedarnath shrine, Prime Minister Narendra Modi on Sunday interacted with media and said his mission is to carry out developmental work in the region.

"My mission here is that we should look into 'prakriti, pariyavaran' and 'pariyatan' (nature, environment, and tourism). Fortunately, I have a hard-working team. I thank the media also for covering this region as it will help to boost tourism here. I usually take a stock of progress made in this area via video conferencing," Modi said.

When asked if he prayed for his victory in the Lok Sabha elections, the Prime Minister said, "I did not ask for anything from Baba Kedarnath. God has made us self-sufficient beings who are able to give rather than ask."

Urging citizens to travel India he said, "I want people of our nation to see the country. While I do not have any objection to them travelling to foreign countries but they should also travel to see the different places in our country."

The Prime Minister also said that he has a special relationship with Kedarnath and added that he had made a master-plan for the re-development of the region after the 2013 floods.

Prime Minister Narendra Modi on Sunday ended his 18-hour meditation session inside a holy cave of Kedarnath. He will now head towards Badrinath temple.

The Prime Minister on Saturday offered prayers at the Himalayan shrine of Kedarnath, a day after campaigning for the Lok Sabha polls came to a close.

Modi's constituency Varanasi is voting today in the last phase of national polls along with 58 other seats. He is seeking re-election from the seat, which saw him emerge victorious in 2014 with a margin of over 3 lakh votes.