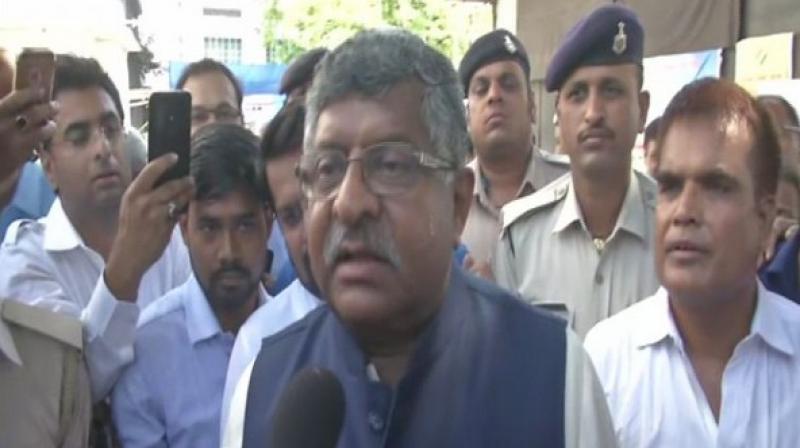 'The country will achieve new levels of growth in the coming days. I am confident of my victory as always,' Prasad said. (Photo: ANI)

Patna: Union Minister Ravi Shankar Prasad on Sunday expressed confidence that Bharatiya Janata Party (BJP) will be able to secure victory in the Lok Sabha elections and also cast his vote in the ongoing seventh phase of the elections.

"I cast my vote just now, the public are with us (BJP). The mood of Patna Sahib is the same as that of the rest of the country, people want to make Modi ji the Prime Minister again," Prasad told reporters outside his polling booth after casting his vote.

Prior to casting his vote Prasad, who was accompanied by his 88-year old mother, expressed the confidence that he will win.

"I am going to cast my vote, which is my democratic right. The country will achieve new levels of growth in the coming days. I am confident of my victory as always," Prasad told reporters at the time of leaving his house.

The BJP fielded Prasad against Congress leader and sitting MP from Patna Sahib Shatrughan Sinha. Sinha, a two time MP from the same seat is seeking re-election for the third time from the seat.

Bihar is seeing polling on 8 seats in the seventh and the final phase of the Lok Sabha polls. The counting of votes will take place on May 23.