The counting of votes would take place on May 23. 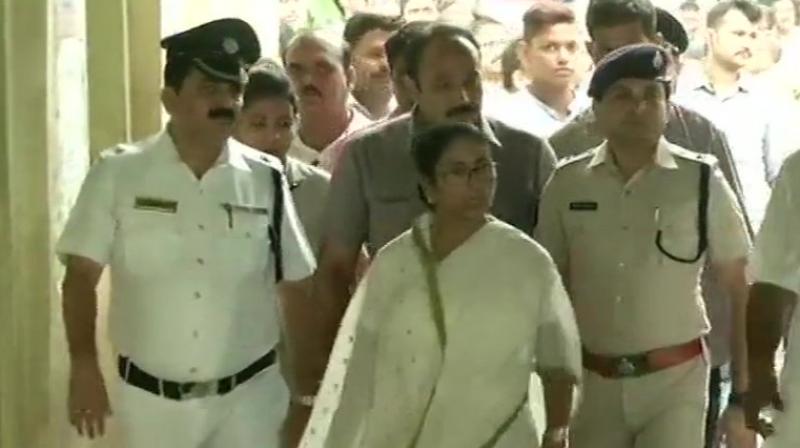 The TMC supremo made this statement after casting her vote at a polling station here. (Photo: ANI twitter)

Kolkata: Upping the ante on the BJP, West Bengal Chief Minister Mamata Banerjee alleged that BJP workers and CRPF deployed on election duty have committed "unprecedented torture" in the state.

After casting her vote at a polling station in Kolkata, Mamata said: "It is not the time of campaigning as voting is going on, hence, I will not say anything about campaigning. But in my state, since morning, the torture by the BJP workers along with the CRPF during polling is unprecedented and I have never seen it before."

The TMC supremo made this statement after casting her vote at a polling station here.

Large scale violence is being reported from different parliamentary constituencies of the state with Trinamool and BJP blaming each other for the violence. While vehicles of few leaders were vandalised in poll-related violence, BJP has also accused TMC of beating its office-bearers.

BJP MP candidate from Jadavpur, Anupam Hazra said that the Mandal president of his party was beaten by 'goons' of TMC. BJP candidate for Diamond Harbour Lok Sabha constituency, Nilanjan Roy's car was also vandalised in Dongaria area of the constituency on Saturday.

Voters in Basirhat and Jadavpurhave alleged that TMC workers are disrupting the election process by not allowing them to vote today.

West Bengal voted across all the seven phases of national polls, today is the last one. All the earlier phases have witnessed poll violence with TMC and BJP trading blame over the issue. Nine seats in the state are voting today.

Sunday marks the end of the seven-phase polling in the country with a total of 59 parliamentary constituencies voting today. The counting of votes would take place on May 23.