'The Congress is not defeated in the elections. But the governors appointed by PM (Narendra Modi) ensure the party's defeat,' said Singh. 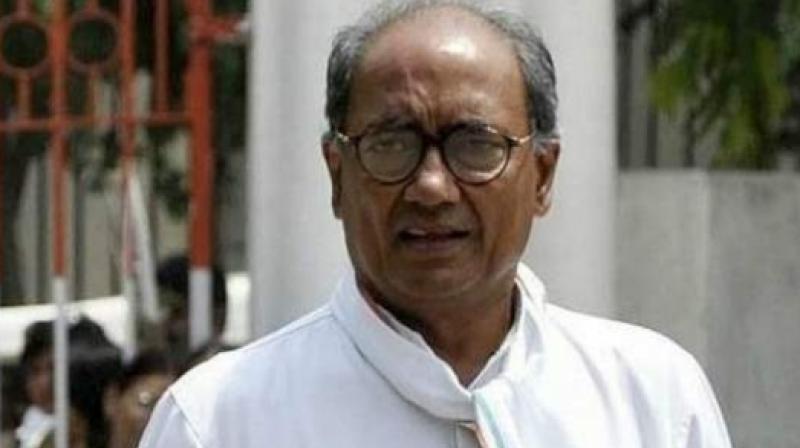 Citing examples of Goa, Mizoram, Manipur, Bihar and Karnataka, the Congress leader questioned why the single largest party was not invited to form government in the above mentioned states, like in Karnataka. (Photo: PTI)

Mandsaur: Senior Congress leader Digvijaya Singh on Friday said the party was being 'defeated' by "governors appointed by prime minister" and not by voters.

Replying to a query on the party's string of losses in recent assembly polls, he said, "The Congress is not defeated in the elections. But the governors appointed by Prime Minister (Narendra Modi) ensure the party's defeat".

Citing examples of Goa, Mizoram, Manipur, Bihar and Karnataka, the Congress leader questioned why the single largest party was not invited to form government in the above mentioned states, like in Karnataka.

"If the single largest party should be invited to form the government, why did this not happen in Bihar and Goa? These activities go against the party (Congress)," he said.

In Bihar, Lalu Prasad's Rashtriya Janata Dal (RJD) had emerged as the single largest party with 80 seats in the 243-seat assembly, but ended up in the opposition.

The BJP-JD(U) alliance rules the state.

Similarly, in Goa, the Congress bagged the maximum - 17 of 40 seats, yet BJP with 13 seats formed the government in alliance with the Goa Forward Party and the MGP along with three Independents.

In Manipur and Meghalaya too, the BJP managed to form alliance governments despite the Congress being the single largest party.

Singh said the BJP was only hankering after power and money and was indulging in horse-trading in Karnataka to prove majority in tomorrow's floor test.

The BJP, which won 104 seats in the 222-member Karnataka Assembly, was invited by the governor to form the government despite the JD(S)-Congress combine staking claim by citing the support of 117 MLAs.

The majority mark is 112 seats.

On the Madhya Pradesh Assembly polls, slated for later this year, Singh said the Congress would go to the electorate asking them to give the party a clear mandate.