Doctor from UP hurls a shoe at BJP spokesman

Continuing to address the media later, Mr Rao claimed the conspiracy had been “exposed” and Ms Thakur has been discharged in some cases. 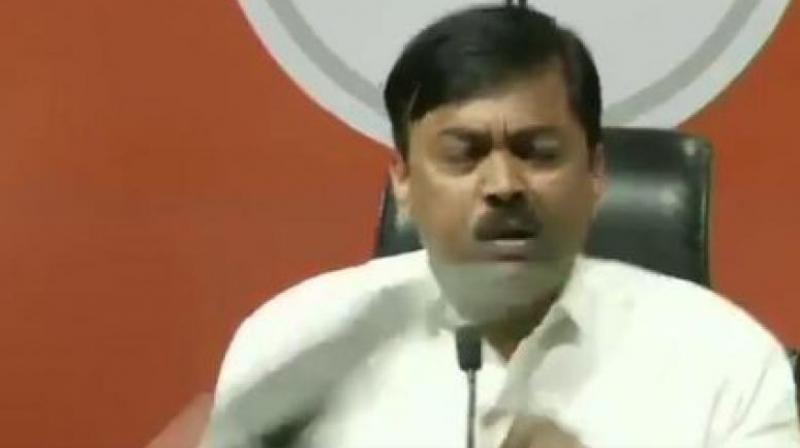 New Delhi: A shoe was hurled at BJP national spokesman and Rajya Sabha member G.V.L. Narasimha Rao at the party headquarters here on Thursday when Mr Rao, along with general secretary Bhupendra Yadav, were defending the party’s decision to field Malegaon blast case accused Sadhvi Pragya Singh Thakur against Congress stalwart Digvijay Singh from Bhopal parliamentary constituency. The BJP leaders said the electoral fight in the prestigious parliamentary seat was a “fight against the Congress conspiracy to insult the Hindu religion by linking it to terrorism”, and described Mr Singh as “the face of this conspiracy”. The press conference was stalled for a few minutes over the incident, and the accused, who had identified himself as Kanpur doctor Shakti Bhargava, was handed over to the Delhi Police later.

Continuing to address the media later, Mr Rao claimed the conspiracy had been “exposed” and Ms Thakur has been discharged in some cases. He also mentioned the arrest of Hindutva activist Swami Aseemanand and his recent acquittal to attack the Opposition party.

Ms Thakur had been discharged over charges under the stringent Maharashtra Control of Organised Crime Act but is still facing other serious charges. Aseemanand was recently acquitted  in the Samjhauta Express blast case.

“We are contesting this election in Bhopal as a fight against the Congress conspiracy to insult the Hindu religion by linking it to terrorism. Digvijay Singh was the face of this conspiracy,” Mr Rao said.

Dubbing Ms Thakur as an innocent person, he said she was tortured and asked the Opposition parties what problem they had if the BJP fielded her as its candidate. He alleged that Congress president Rahul Gandhi had “masterminded” this conspiracy, claiming it was meant to appease a minority community. He also claimed that “Islamic terror” was an accepted notion the world over as a “large number of terror organisations perpetrate terror in the name of the religion”.

Meanwhile, a joint team of the Delhi Police and the Intelligence Bureau interrogated the man who had hurled the shoe. His identity was verified and a medical examination done. According to deputy commissioner of police (central) M.S. Randhawa, nothing suspicious was found in the joint interrogation and he was released later as no complaint had been filed against him. He was said to be disturbed as he was involved in litigation in various courts over civil disputes, the DCP said, adding that he had hurled the show to seek attention, and had entered the venue by showing his own identity card and did not use any media pass.