Ex MP CM while announcing Sadhvi Pragya as BJP’s candidate for Bhopal, described her as someone who was born to keep nation secure. 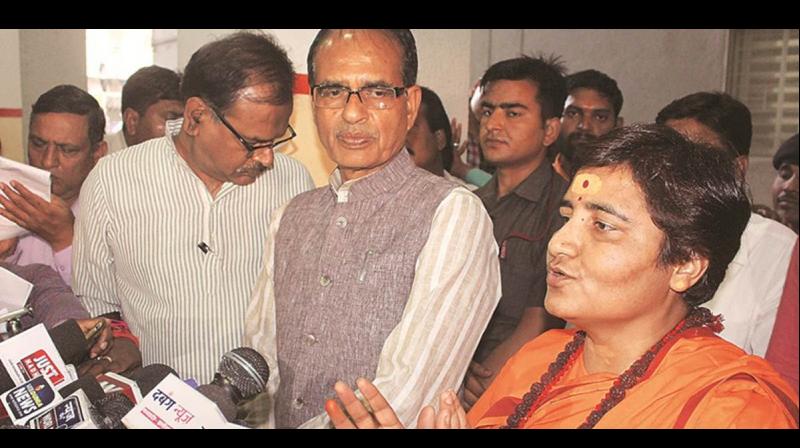 With BJP blaming Congress for putting Sadhvi behind bars, the Opposition party has now hit back at the ruling party. Sadhvi Pragya, who is facing trial in the Malegaon bomb blast case, was accused of a terrorism-related crime by the BJP state government in Madhya Pradesh under the chief ministership of Shivraj Singh Chouhan.

Raising the question on her contesting the Lok Sabha Elections, Congress spokesperson Pankaj Chaturvedi asked, “While announcing her candidature, former CM Shivraj Singh Chouhan forgot that she is accused of the 2008 Malegaon blast and is out on bail. How could she be the protector of the nation?”

“Shivraj should not forget that his own police had arrested her twice for her alleged involvement in Sunil Joshi’s murder in 2008 and 2011. Shivraj should explain how a terrorist and murder accused can protect and strengthen the nation,” he further said, reported PTI.

Former Madhya Pradesh chief minister Shivraj Singh Chouhan had on Wednesday, while announcing Sadhvi Pragya Thakur as the BJP’s candidate for Bhopal, described her as someone who was born to keep the nation secure.

Earlier this month, in a campaign speech in Maharashtra, Prime Minister Narendra Modi attacked the single largest Opposition party for terming the ‘Hindu terror’ slur and said that Hindus would never forgive Congress. Many BJP leaders have described Thakur as a victim of a Congress conspiracy to “defame Hindus”.

Sadhvi Pragya, along with eight others, were arrested on October 23, 2008 in Dewas district of Madhya Pradesh by the Shivraj Singh Chouhan-led BJP government for the murder of right-wing activist Sunil Joshi.

Sunil Joshi, whose name figured in the Mecca Masjid, Samjhauta and Malegaon blast cases, was killed on December 29, 2007, in Dewas. On March 25, 2009, the police closed the case on the order of Dewas SP and all the accused, including Sadhvi Pragya, were released.

A Madhya Pradesh court on February 1, 2017, acquitted Pragya Thakur, along with all other accused of all charges in connection with the Joshi murder case.

The Madhya Pradesh police on July 9, 2010, reopened the murder case and filed a chargesheet alleging that Sadhvi Pragya and four others had killed Joshi fearing he might expose the entire conspiracy from Samjhauta to Ajmer blasts.

On February 26, 2011, police issued an arrest warrant against Pragya Thakur. However, she was already in jail due to her alleged involvement in the Malegaon bomb blast which claimed six lives and left 100 people injured.