The SC ruled that Judge Loya died of natural causes and the petitions were serious attempts to obstruct the course of justice. 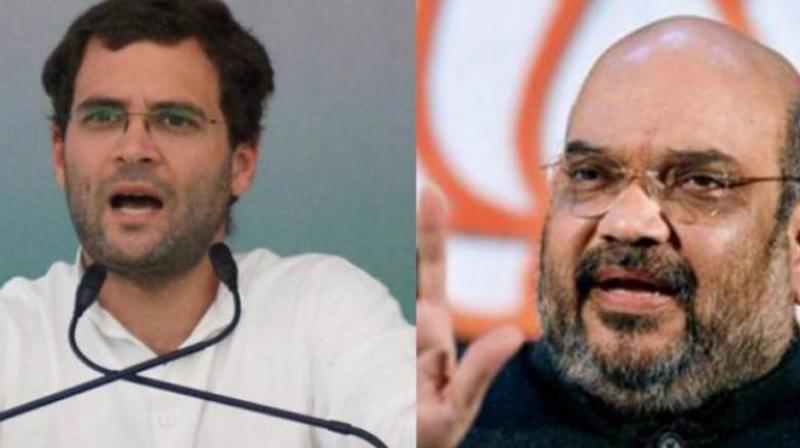 Amit Shah was an accused in the case but was later discharged. Several activists and opposition parties had alleged a foul play in his death. (Photo: File/PTI)

New Delhi: The BJP on Thursday mounted an attack on the opposition Congress after the Supreme Court rejected pleas to probe the death of Judge BH Loya, alleging that the "invisible" hand behind the petitions was that of Rahul Gandhi who tried to use the judiciary for "character assassination" of Amit Shah.

The Supreme Court on Thursday ruled that Judge Loya died of natural causes and that the petitions were serious attempts to scandalise and obstruct the course of justice.

Addressing a press conference, BJP spokesperson Sambit Patra described the PILs seeking the probe into the death of Judge Loya as "political interest litigation", and charged that Rahul and his party were behind it.

Noting that the Congress had held press conferences and Rahul had led a delegation of opposition parties to the President for seeking a probe, Patra said he should "apologise" and be "ashamed" for his conspiracy to target Amit Shah, and Indian judiciary and democracy.

The Congress engages in all sorts of conspiracies after its ruling family loses power, he alleged and added the attempt to use judiciary for political purposes was a "new low" in Indian politics.

The "invisible hand" behind these petitions in the top court belonged to Rahul and the Congress, Patra alleged.

Reacting to the verdict, Union Home Minister Rajnath Singh said, "The Supreme Court has also cautioned against the misuse of courts in political tug of war. The SC verdict gives a clear message that the judiciary cannot be misled by allegations based on political vendetta."

The issue of Loya's death had come under the spotlight in November 2017 after media reports quoting his sister had fuelled suspicion about circumstances surrounding it and its link to the Sohrabuddin case, which he was hearing before he died.

Amit Shah was an accused in the case but was later discharged. Several activists and opposition parties had alleged a foul play in his death.

While dismissing the plea for an independent probe, the top court said that with these petitions it becomes clear that a real attempt and a frontal attack was made on the independence of the judiciary. The top court said frivolous and motivated litigation has been filed to settle political rivalry.