Shah said Congress had committed the sin of linking Hindu culture with terrorism. 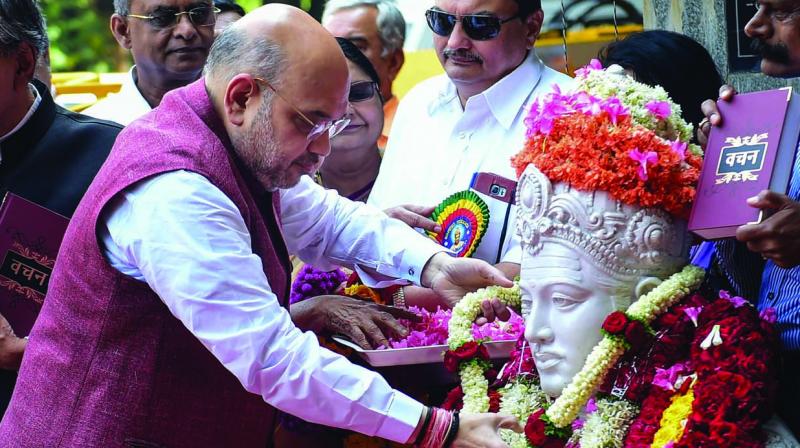 BJP National President Amit Shah offers tribute to Lord Basaveshwara on the occasion of Basava Jayanti in Bengaluru on Wednesday. Mr Shah is in Karnataka on a two-day election campaign tour. (Photo: PTI)

Bengaluru: BJP president Amit Shah on Wednesday accused the Congress of having defamed the country in the name of 'saffron terror' and 'Hindu terror' and demanded an apology from party chief Rahul Gandhi, following the acquittal of right-wing activists in the Mecca Masjid blast case. He said Congress had committed the sin of linking Hindu culture with terrorism.

"The great Hindu culture taught the world about culture, peace and civilisation for lakhs of years. The Congress party has committed a sin by linking it to saffron terror," he said at a meeting of "Shakti Kendras" of the party. Mr Shah said Congress had defamed the country for several years around the world by using the term saffron terror and Hindu terror.

The BJP president said whenever Congress leaders went around the world all these years, they termed the Mecca Masjid blast case as saffron terror or Hindu terror. By doing so, they 'insulted' the nation, he said. "Rahul Gandhi, terrorism does not have any?religion. You should apologise to the nation," he said. Mr Shah said Congress was now saying they never used saffron or Hindu terror terminologies.

Mr Shah said he wished to state some truths that Rahul Gandhi had mentioned about it on December 16 2010 before the U.S. Ambassador, which was revealed by Wikileaks. The terminologies were used by P Chidambaram on August 25, 2010, Sushil Kumar Shinde on January 20, 2013 and Salman Khurshid on January 20, 2013, Shah said. BJP chief also called on Kannada scholar Chidana-ndamurthy and Dalit writer Siddalingaiah. Mr Shah conducted a roadshow at Hoskote near Bengaluru. Mr Shah garlanded the statue of the 12th century social reformer Basaveshwara on his birth anniversary.