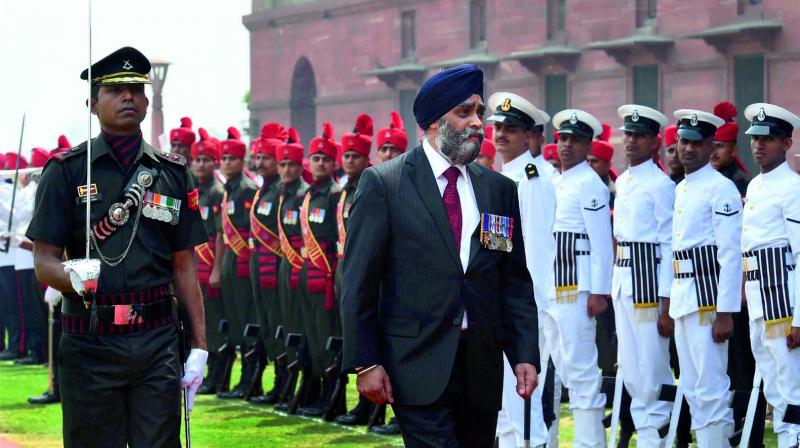 New Delhi: On an official visit to India, Canada’s defence minister Harjit Singh Sajjan has rebutted Punjab chief minister Capt. Amrinder Singh’s assertion that he sympathised with the Khalistan cause that espoused for a separate independent homeland for Sikhs.

“What you are is determined by what you do. You look at my actions. I don’t step into the internal politics of any one province or any one nation...My goal is to build relationships as representative of the Canadian government and that is what I am here to do… I do not promote the breakup of any country... My job is to promote a relation,” Mr Sajjan said, adding that he will not get into petty politics. A few days back, the Punjab CM had said in a TV show that the Canadian defence minister and five ministers in the Justin Trudeau government were “Khalistani sympathisers” and that he would not meet Sajjan during his visit to Punjab. Canada had termed the allegation as “disappointing and inaccurate.”

An Afghan war veteran who fought against the Taliban and a former police officer, Sajjan was born in Bambelli village in Punjab’s Hoshiarpur. Leaving for the Canadian shores with his parents as a toddler, the visiting minister added a personal touch in his interaction during a seminar on “Conflict Prevention and Peacekeeping in a Changing World organised by the Observer Research Foundation.”

“I am also very proud of the fact that I was born here…I cherish that memory and my Indian roots...Nobody can take away my village, my parents,” he said.

On his forthcoming visit to Punjab, he said: “My reason for going to Punjab is to pay respects at Harmandir Sahib as you know I am a Sikh and I want to pay my respect to the village where I was born.”

The Union minister  pointed out to his Canadian counterpart that it had triggered outrage in India and was a total exaggeration of facts.

In his address, Sajjan underscored that military by itself cannot resolve conflicts. Responding to a query on ISIS, he said grievances within the Sunni population in Iraq and Syria led to the rise of the terror group, and for it to be eliminated the “root causes,” including that of recruitment into its ranks, must be addressed.

“We in Canada cannot be an island of stability in an unstable world,” he said.

On his first visit to India after taking charge as Canada’s defence minister, Sajjan met his Indian counterpart Arun Jaitley in the morning and discussed a range of issues focusing on enhancement of defence and security cooperation between the two countries.