8 of 10 ministers in Punjab first-timers

The swearing-in ceremony of the Mann's cabinet will be held at Punjab Raj Bhawan at 11 am, officials said 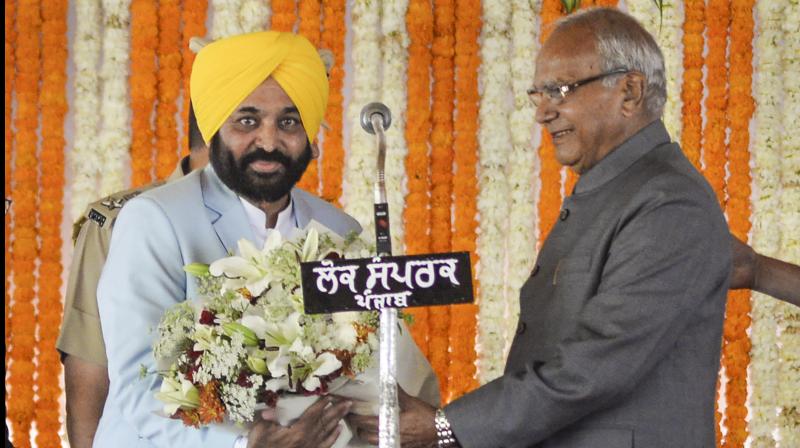 Chandigarh: Ten ministers, including a woman, will be inducted in the Bhagwant Mann government in Punjab on Saturday.

Among the 10 ministers, eight are first-time MLAs.

The swearing-in ceremony of the Mann's cabinet will be held at Punjab Raj Bhawan at 11 am, officials said.

After their oath-taking, the newly inducted ministers will assume charge in the Punjab Civil Secretariat and the first cabinet meeting of the AAP government will be held in the afternoon, sources said.

In a tweet on Friday evening, Bhagwant Mann put out a picture giving names of the 10 party MLAs who will be sworn-in as ministers and congratulated them.

There are 18 berths in the cabinet, including the chief minister.

Of the ten, five MLAs represent Malwa region, four Majha and one legislator is from Doaba.

Four MLAs who will be sworn-in as ministers represent reserve constituencies--Dirba, Jandiala, Malout and Bhoa.

The ministers to be inducted include Harpal Singh Cheema, second-time legislator from Dirba and the party's Dalit face. He was also the Leader of the Opposition in the previous Assembly.

Other MLAs to be inducted in the cabinet are Dr Baljit Kaur, Harbhajan Singh from Jandiala, Dr Vijay Singla from Mansa, Lal Chand from Bhoa, Kuldeep Singh Dhaliwal from Ajnala, Laljit Singh Bhullar from Patti, Brahm Shanker from Hoshiarpur and Harjot Bains from Anandpur Sahib.

Cheema, an advocate by profession, had defeated Shiromani Akali Dal's Gulzar Singh Moonak by a margin of 50,655 votes.

He was first elected as an MLA in 2017 and also served as a member of the Assembly committee on welfare of SCs, STs and BCs.

The lone woman who found ministerial berth is Dr Baljit Kaur, who won from Malout.

She joined AAP after resigning from her government job at the Muktsar civil hospital. During election meetings, she had even examined eye patients.

Singla is a dentist and did Bachelor of Dental Surgery from Punjabi University, Patiala.

Bains, a lawyer by profession, had unsuccessfully contested from Sahnewal in 2017. Bains is a former president of the party's youth wing.

Harbhajan had unsuccessfully contested from the seat in 2017

Lal Chand Kataruchakk, who was president of the party's SC wing, won from Bhoa seat in Pathankot. He trounced Congress candidate Joginder Pal.

Earlier, the names of Aman Arora, Baljinder Kaur and Sarvjit Kaur Manuke, who are two-time AAP MLAs, were also doing the rounds for ministerial berths.

Punjab Governor Banwarilal Purohit had on Wednesday administered the oath of office and secrecy to Bhagwant Mann in a ceremony at Khatkar Kalan, the ancestral village of freedom fighter Bhagat Singh.