According to party sources, Punjab AAP legislators present in the meeting are believed to have been convinced with Kejriwal's explanation. 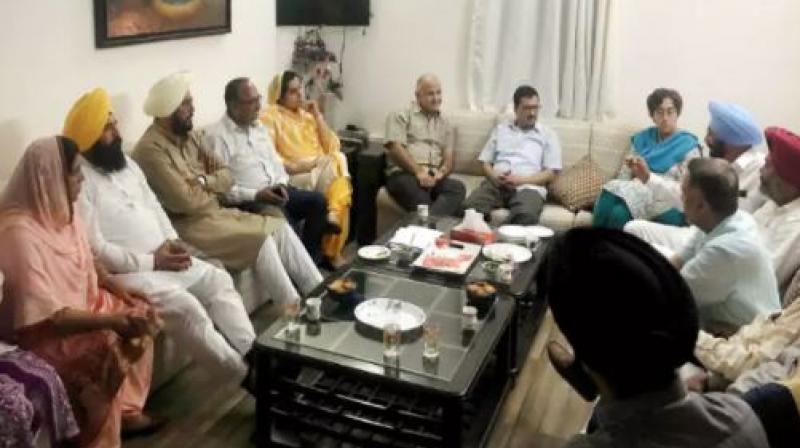 Of the 20 AAP legislators from Punjab, 10 legislators along with state unit leaders met Delhi Deputy Chief Minister Manish Sisodia at his residence in Delhi on Sunday where Chief Minister Arvind Kejriwal was also present. (Photo: PTI)

New Delhi: On the backfoot over tendering an apology to former Punjab minister and Akali leader Bikram Singh Majithia, the AAP on Sunday sought to pacify its party legislators from the northern state to avert a split in the state unit.

Party supremo Arvind Kejriwal's apology letter to Majithia for accusing him of being involved in drugs trade, had taken everyone by surprise, especially the AAP's Punjab unit.

The party's Punjab president Bhagwant Mann and its co-president Aman Arora had recently resigned from their posts in protest against Kejriwal's apology.

The chief minister is said to have given an explanation behind his apology to Majithia.

Majithia had slapped a defamation case against Kejriwal and other AAP leaders for accusing the former of drug trade during the 2017 Punjab Assembly polls campaign.

According to party sources, the Punjab AAP legislators present in the meeting are believed to have been convinced with Kejriwal's explanation.

However, only half of the dissenting party legislators were present in the meeting, with the remaining legislators still miffed with the party leadership.

"Anyhow, it rules out any split in the party in Punjab, as of now. Forming a separate group or splitting the party would require the consent of two-third of the 20 AAP MLAs," the sources said.

Among the prominent absentees were Leader of Opposition in the Punjab Assembly, Sukhpal Singh Khaira and Bhagwant Mann, AAP MP from Sangrur.

There have been different demands by the AAP legislators and party leaders from Punjab after Kejriwal's apology letter went public, ranging from giving them more autonomy to forming a different group in protest.

Aman Arora, AAP legislator from Suna, who had attended the meeting said there was some "miscommunication”.

The reason Kejriwal had apologised is because he has several cases against him in many parts of the country. And some of them are in the fast track courts, he told reporters after the more than two hour-long meeting.

Arora said the AAP legislator present in the meeting were convinced with the explanation given by Kejriwal as the legal battle was draining him and the party in terms of resources.

This, he said, was also consuming the party supremo's time which could be used for focusing on governance in Delhi.