Yogi Adityanath to take oath as UP CM today at 2:15 pm; Modi to attend ceremony

The controversial leader was elected unanimously as the state legislative leader by the party on Saturday at their MLA meet. 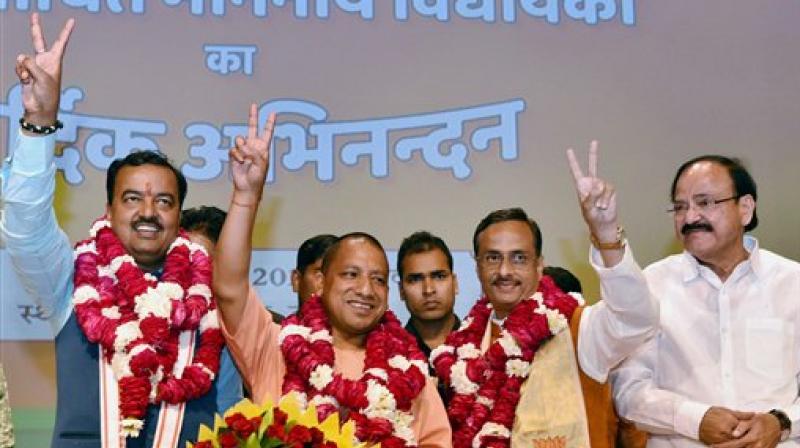 Governor Ram Naik will administer the oath of office and secrecy to Adityanath and his Cabinet.

Along with Adityanath, State BJP President Keshav Prasad Maurya and the party's National Vice-President Dinesh Sharma will be sworn in as Deputy Chief Ministers.

Yogi Adityanath, a five-time Lok Sabha MP from Gorakhpur, was unanimously elected as BJP Legislature Party leader at a meeting of the newly-elected MLAs in Lucknow last evening. He, later, met the Governor and staked claim to form the government in the state.

Senior party leader and Union Minister M Venkaiah Naidu, who was the central observer at the Legislature Party meeting, said it was a watershed moment for the BJP and it has become a common man's party. He said, the mandate is for development, and against corruption and black money.

In the recently held polls in the state, BJP had bagged 312 seats, and its allies 13, taking the alliance's tally to 325 in the 403-member Assembly.

Meanwhile, Adityanath has called on his followers and admirers to maintain law and order during their celebrations, giving full freedom to the state police to take action on those who create chaos.

"There should be no chaos in the name of celebrations. Police must deal swiftly and firmly with miscreants," he said.

Following the chief minister designate's orders, all the District Senior Superintendent of Police (SSP) have been called to ensure law and order are maintained.