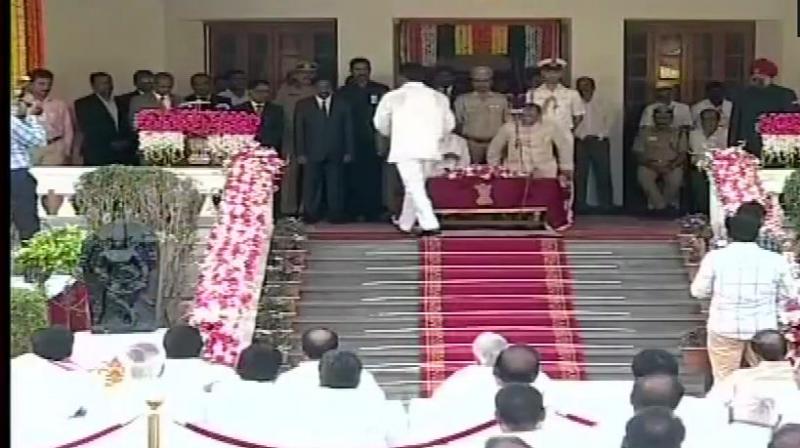 Harish Rao, who earlier served as Irrigation Minister, did not figure in the list, as also Rama Rao.

Andhra Pradesh and Telangana Governor E S L Narasimhan administered them the oath of office and secrecy at Raj Bhavan, in the presence of the chief minister, taking the Cabinet size to 12.

A senior leader of the ruling party said KCR, as the Chief Minister is popularly known, may have the idea of utilising Harish Rao's services for the upcoming Parliament elections by keeping him out of the cabinet.

The CM forms cabinet keeping many calculations in his mind. Whatever is entrusted to me, I will discharge them like a disciplined soldier. It is not correct that I am dissatisfied (for not getting cabinet berth).

I condemn all the wrong propaganda that is being spread in social media about me (being unsatisfied)," he told reporters.

He was responding to a question on whether he was unhappy over not being inducted in the cabinet.

Rama Rao was appointed as TRS Working President, a day after the Chief Minister assumed charge for the second term on December 13 after the party returned to power with a thumping majority in the 119-member Assembly.

While appointing KTR as working president, KCR had said he wanted to focus on national politics and focus on various developmental activities in the State.

Rao has been promoting the idea of forging a non-BJP, non-Congress federal front of regional parties.

As part of the initiative, he had met various leaders and sought their support.

Andhra Pradesh leader of Opposition and YSR Congress Party chief YS Jagan Mohan Reddy welcomed KCR's proposed front. None of the woman members could make it to the Council of Ministers.

Rao's first Cabinet also did not have a woman minister.

Along with the chief minister, Mohammed Mahmood Ali had also been sworn in earlier, and he was allotted the Home portfolio.

The "delay" in Cabinet expansion had drawn fire from opposition parties who contended that it amounted "violation" of constitutional norms and had hit administration.

However, rejecting the charge, the ruling TRS said a high-level committee had looked into ways to streamline the entire administration by bringing together connected departments under one ministry and the exercise took time.

Last week, the chief minister fixed Tuesday for the Cabinet expansion, as it is an "auspicious day" being "Magha Shuddha Pournami" as per the Lunar calendar.

Rao can still have six moreministers in the Cabinet as per the constitutional cap of 15 per cent of the assembly strength of 119 members.

This keeps the hopes alive for some of the disgruntled MLAs who did not get berth in the current expansion.