BJP-AIADMK alliance will contest the Tamil Nadu elections under the leadership of AIADMK and 2019 LS polls in name of PM Modi. 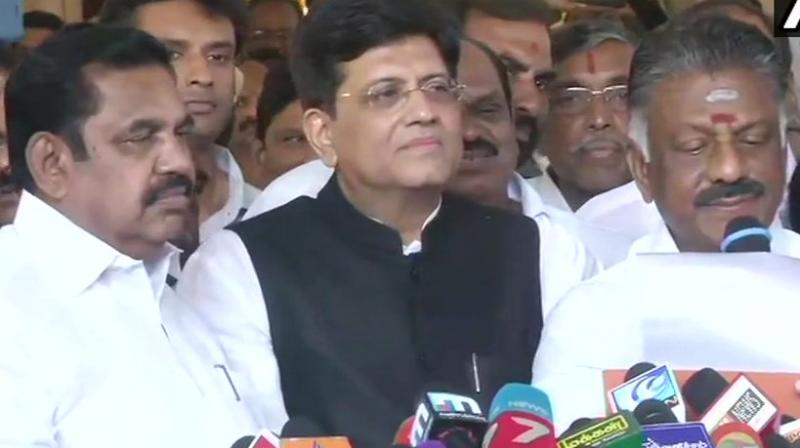 A confident Goyal, claimed that the alliance will sweep Tamil Nadu in 2019 and win all the 40 Lok Sabha seats in the state. (Photo: ANI| Twitter)

New Delhi: The BJP on Tuesday closed the deal on its alliance with Tamil Nadu’s AIADMK for the upcoming Lok Sabha elections.

Union Minister Piyush Goyal, BJP’s negotiator said, “I am extremely delighted that the AIADMK and the BJP have concluded very fruitful discussions and agreed to contest the parliamentary elections both in Tamil Nadu and by-elections to 21 seats together in alliance along with other friendly partners."

“BJP will contest on 5 seats in Lok Sabha elections and we will be contesting together in Tamil Nadu and Puducherry,” Goyal added.

A confident Goyal, claimed that the alliance will sweep Tamil Nadu in 2019 and win all the 40 Lok Sabha seats in the state.

Tamil Nadu Deputy CM O Panneerselvam said the AIADMK and the BJP will have an alliance for Lok Sabha elections which will be a mega and winning alliance.

The BJP-AIADMK alliance will contest the Tamil Nadu elections under the leadership of AIADMK and 2019 Lok Sabha elections in the name of PM Modi.

Before announcing the alliance with BJP, the AIADMK announced its tie up with PMK and its seat sharing.