In Gujarat, BJP won 99 out of 182 seats while the Congress, which gave a tough fight to the saffron party, secured 77 seats. 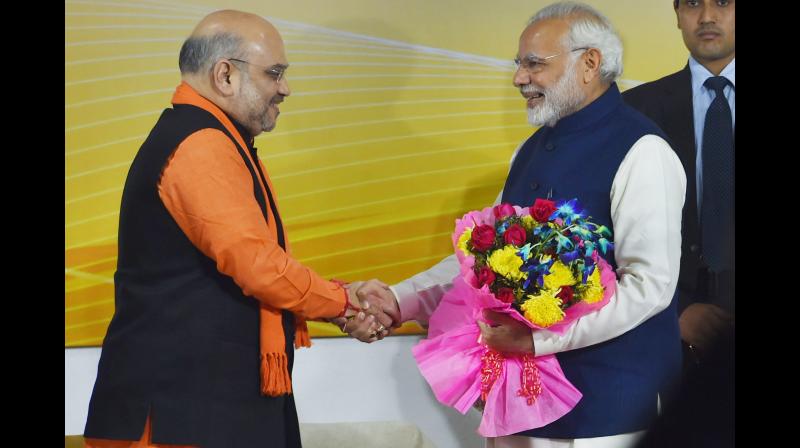 Prime Minister Narendra Modi being greeted by BJP President Amit Shah at a felicitation function in New Delhi on Monday, after the party's win in Gujarat and Himachal Pradesh Assembly elections. (Photo: PTI)

New Delhi: Hailing the victory of the Bharatiya Janata Party (BJP) in Gujarat and Himachal Pradesh, Prime Minister Narendra Modi on Monday said the country has new dreams and is not ready to compromise anymore.

“Gujarat election results are historic. In this day and age, for a party to keep winning for so long is appreciable,” said Modi while addressing media at the BJP headquarters in Delhi.

Modi was received by BJP President Amit Shah at BJP headquarters. Shah and other leaders felicitated Modi as party celebrated the victories in the two states.

In Gujarat, BJP won 99 out of 182 seats while the Congress, which gave a tough fight to the saffron party, secured 77 seats.

In Himachal Pradesh, which has alternated between the BJP and the Congress for decades, the BJP cruised to a two-third majority win with 44 seats in the 68-constituency Assembly. The Congress secured just 21 seats.

Below are the highlights:

Concluding his address, Modi hailed development and shouted the slogan, "only 'vikas' will win".