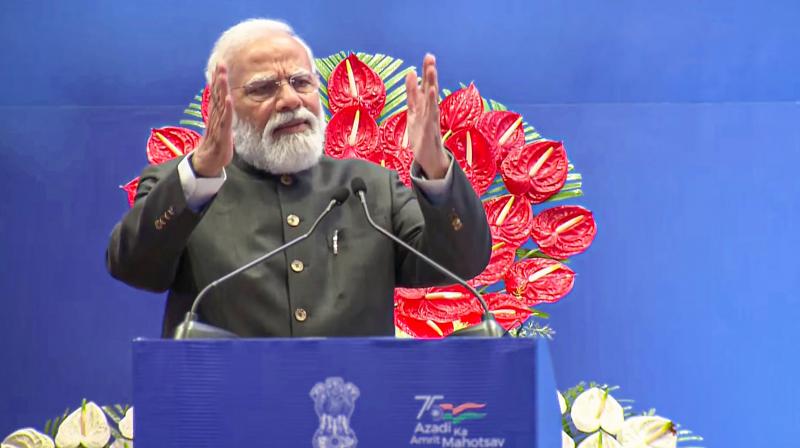 New Delhi: Prime Minister Narendra Modi on Thursday said his government is using all channels including diplomatic to bring back high-profile economic offenders, leaving them with no option but to return to the country.

Speaking at a symposium on credit flow and economic growth, he asked banks to support wealth and job creators with proactive lending while promising to stand by any loans given in right earnest.

"In our attempt to bring back fugitive (economic offenders), we relied on policies and law and also used diplomatic channels. The message is very clear -- return to your country. We are continuing these efforts," he said.

He, however, did not name or refer to any particular offender.

India has in recent times stepped up efforts to extradite high-profile economic offenders such as Vijay Mallya and Nirav Modi, wanted in connection with bank frauds and money laundering cases.

He also said the financial health of banks is now in a much-improved condition as his government has since 2014 found ways to address the problems they faced.

"Indian banks are strong enough to play a major role in imparting fresh energy to the country's economy, for giving a big push and making India self-reliant.

"This is a time for you to support wealth creators and job creators. It is the need of the hour that now the banks of India work proactively to bolster the wealth sheet of the country along with their balance sheets," he asserted.

Banks, Modi said, need to shed the culture of they being an approver and the customer being an applicant, and adopt the model of partnership.

"When the country is working so hard on financial inclusion, it is very important to unlock the productive potential of the citizens," he said.

"We addressed the problem of NPAs, recapitalised banks and increased their strength. We brought reforms like Insolvency and Bankruptcy Code (IBC), reformed many laws and empowered Debt Recovery Tribunal," he said.

"Don't wait for customers to come to banks. You have to go to them," he said, while assuring bankers that he will "stand by them like a wall" for every honest decision they take.

Asking banks to move ahead with a "big thinking and innovative approach", Modi said "we will become laggards if we delay adopting Fintech."

Setting a target for banks, he said by August 15, 2022, every bank branch should have at least 100 clients who conduct the entire business digitally.

"Banking sector has to understand this that in India it is time for investing in ideas. It is time to support startups. Startup is an idea, there is no asset, it is just an idea.

"You (banks) have no dearth of resources, data. The government will continue to do reforms, and you (banks) have moved forward along with the nation's commitment and target," he said.

The Prime Minister said steps taken in the recent years have created a strong capital base for the banks.

Banks have sufficient liquidity and no backlog for provisioning of bad loans, while non-performing assets (NPAs) in public sector banks are at the lowest in the last five years. This has led to the upgrading of the outlook for the Indian banks by international agencies, he pointed out.

The Prime Minister emphasised on the need to proactively serve the customers and asked banks to provide customised solutions to customers, companies and MSMEs after analysing their needs.

He also praised the banking sector for its enthusiasm in implementing the Jan Dhan Scheme.

The Prime Minister said banks should proactively get involved in the growth story. He gave the example of the Production Linked Incentive (PLI) scheme where the government is doing the same by giving Indian manufacturers an incentive on production.

Under the PLI scheme, manufacturers have been incentivised to increase their capacity manifold and transform themselves into global companies. Banks can play a big role in making projects viable through their support and expertise, said Modi.

He said with consolidation among public sector lenders, they are able to raise funds from market. With the reforms, banks have a huge and strong capital base, good liquidity and no NPA backlog.

"You are the main stakeholder in nation-building... Banks can play a big role in boosting the economy and making India aatmanirbhar," the Prime Minister added.