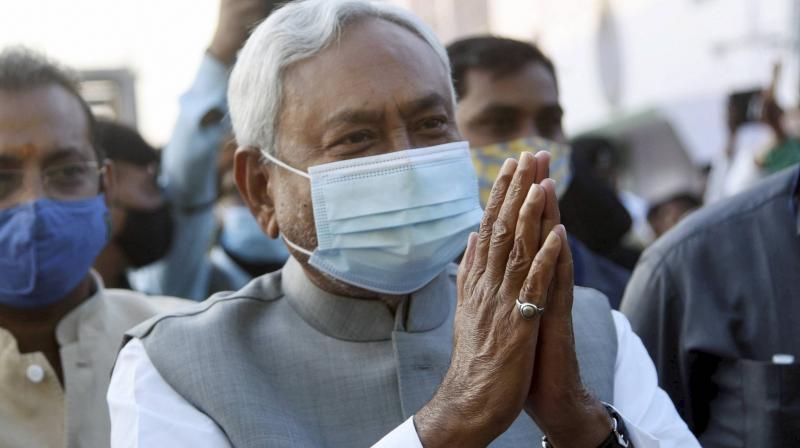 Patna: A day after taking the oath as Bihar chief minister for the fourth straight term, Nitish Kumar on Tuesday allocated portfolios to his 14-member team. While he kept the home, vigilance, general administration and Cabinet affairs portfolios, BJP leader Tarkeshwar Prasad, who replaced Sushil Kumar Modi as one of two deputy CMs, was allotted important departments like finance, commercial taxes, environment and forest, information and technology, disaster management and urban development.

Mr Prasad, who hails from the Seemanchal region, won the Katihar seat for the fourth time. Similarly, Renu Devi, the other deputy CM, was allotted panchayati raj, backward caste upliftment and EBC welfare and industry.

Most of the departments allotted to the new deputy CMs were earlier handled by a veteran leader like Sushil Kumar Modi. The health department was allotted to the BJP’s Mangal Pandey. In 2019  Mr Pandey, as health minister, had faced criticism from the Opposition for his failure to handle the encephalitis outbreak, also known as AES. More than 100 children had died in the state due to the disease. Apart from the health ministry, Mr Pandey will also handle key departments like road construction and art and culture.

Agriculture, cooperatives and sugarcane were given to the BJP’s Amarendra Pratap Singh, while Scheduled Caste MLA from Mithilanchal Rampreet Paswan was given public health and engineering.

From the upper castes, the BJP’s Jiwesh Kumar was allotted tourism, mines and labour. Apart from this, the revenue and law department was allotted to OBC leader Ram Surat Rai.

BJP ally VIP’s chief Mukesh Sahani, despite losing the Assembly polls by a narrow margin from Simri Bakhtiyarpur, was given animal husbandry and fisheries. He is being sent to the Legislative Council. His party VIP won four seats in the Assembly elections.

“Although I have lost the Assembly elections by a thin margin, I assure the people who voted for me that I will work for the welfare of the state. I am also happy that as a minister I will get a chance to learn from a leader like Nitish Kumar,” Mr Sahani said.

Mewalal Chaudhary will be the new education minister. The transport ministry was allotted to Sheila Kumari. Senior JD(U) leader Bijendra Yadav, who is  considered close to chief minister Nitish Kumar, will be handling energy, planning, food and consumer affairs.