Protesting JNU students stopped by cops during march to Parliament

Police officials said adequate security arrangements have also been made along the route of the march. 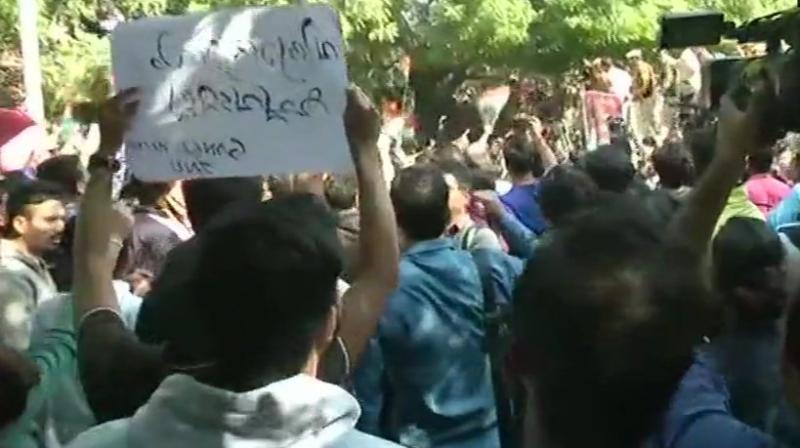 Hundreds of Jawaharlal Nehru University (JNU) students in Delhi were stopped near campus soon after they began marching towards the Parliament on Monday. (Photo: Twitter/ ANI)

New Delhi: Hundreds of Jawaharlal Nehru University (JNU) students in Delhi were stopped near campus soon after they began marching towards the Parliament on Monday.

In the wake of a protest march to Parliament by the JNU Students' Union against hostel fee hike, heavy police deployment was made outside the university's campus on Monday.

Earlier in the day, Section 144 was imposed near the Parliament ahead of the protest march by Jawaharlal Nehru University Students' Union.

The agitation comes on the first day of the Parliament's Winter Session, which will end on December 13.

The students' protest against the increase in hostel fee is going on for the past three weeks, even as the Jawaharlal Nehru University (JNU) administration on Wednesday announced a partial rollback of the hike. The union had termed the decision an "eyewash".

Ten companies are deployed outside JNU, police said. One company comprises 70 to 80 personnel. The JNU Teachers' Association (JNUTA) expressed concern over the deployment of police outside the varsity. "The massive police deployment and barricading at the gates of the JNU campus, which on the face of it appears to be only for the purpose of preventing the students from taking out their planned march to Parliament," it said.

"Such measures or use of force to thwart the exercise of constitutionally guaranteed democratic rights and to impede the students from peacefully taking their voice beyond the campus would be extremely unfortunate and the JNUTA hopes that no such situation will eventually arise," the association said.

Police officials said adequate security arrangements have also been made along the route of the march. Police personnel have been deployed at all entry points leading to Parliament, a senior police official said.