Naidu responded by saying that the house in which he is residing now is not his own. 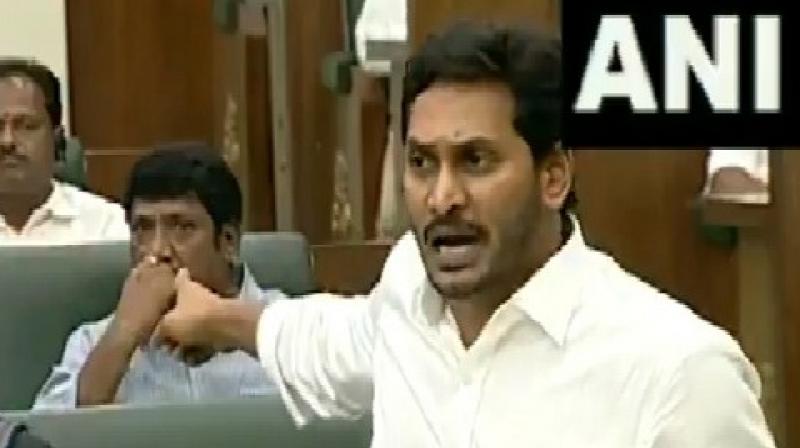 After the intervention of the speaker, Naidu responded to YSRCP's objections by saying that YS Rajasekhar Reddy was his best friend. (Photo: ANI)

Amaravati: Furore erupted in Andhra Pradesh assembly on Thursday during discussions on the topic of illegal constructions in the state during the Question Hour.

The Opposition raised the issue of demolition of Praja Vedika building to which Chief Minister Y.S. Jagan Mohan Reddy responded by saying that the building was constructed illegally.

"When the river's course is diverted, it flows in another way, leading to submersion of houses in that way. If one wants to build a house next to the river; he must take permission from river conservator," the Chief Minister said, asserting that the building constructed on Krishna riverbed violated many rules.

Further, Municipal Administration and Urban Development Minister Botsa Satyanarayana said that the notices to the house in which former chief minister Chandrababu Naidu was residing are also not of vindictive nature.

Naidu responded by saying that the house in which he is residing now is not his own. He said he is residing in a house rented from one Lingamaneni Ramesh.

"Praja Vedika was also not mine, it was a government building," he asserted.

"I won't yield to the threatening of anybody. If needed I will lay down on the road," the former chief minister said.

On the issue, Jagan, in his speech, said that the ground level of the residence in which he resides is at a lower level than the flood level of the Krishna river.

"If a layman does (the same) what will the government do? Rules and regulations should be the same for the Chief Minister and layman. NCBN (Chandrababu Naidu) always speaks of 40 years of experience. What is that experience for, only to violate rules?" Jagan asked.

He also produced a letter to the speaker written by river conservation engineer suggesting to remove the illegal constructions on the banks of river Krishna.

Controversy erupted when Naidu, in his speech, claimed that YSRCP illegally erected many statues of YS Rajasekhar Reddy across the state and asked to remove all the statues illegally erected on the roads as they may cause accidents.

After the intervention of the speaker, Naidu responded to YSRCP's objections by saying that YS Rajasekhar Reddy was his best friend.

"I only had a political rivalry with YSR, not personal rivalry. We travelled together from 1975 to 1983. We used to stay in the same room. Jagan might not be aware of our friendship", he said.

The situation was brought under control by the Speaker after a heated exchange between the Treasury and the Opposition bench during the Question Hour.