The monsoon session, which concludes on August 10, will have 18 sittings amid much-expected drama in both the houses. 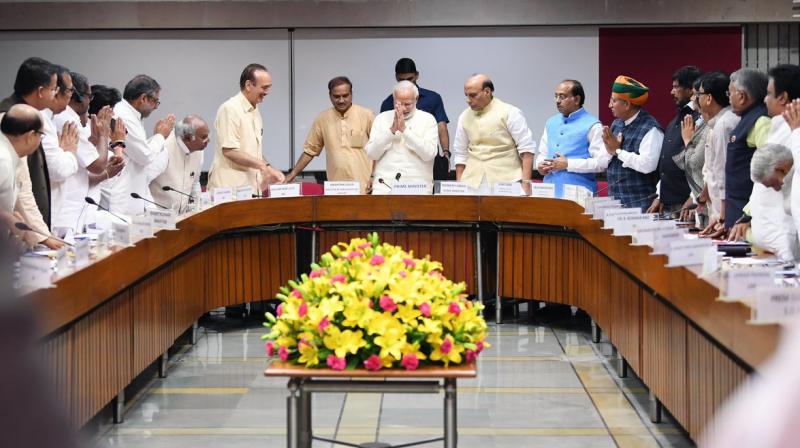 Prime Minister Narendra Modi and other leaders at the all-party meeting at the Parliament Library in New Delhi on Tuesday. (Photo: Twitter/@PMOIndia)

New Delhi: The Monsoon Session of Parliament started on a defiant note from Opposition benches as the Congress, the Telegu Desam Party and Sharad Pawar’s Nationalist Congress Party moved notices for a no-confidence motion against the government.

The motion was accepted in the Lok Sabha by Speaker Sumitra Mahajan.

Earlier on Wednesday, Prime Minister Narendra Modi hoped that the Monsoon Session would be productive and that time would be properly utilised to discuss important matters.

Taking to Twitter, PM Narendra Modi said the government was ready to discuss everything.

Any member, any party can raise any issue, we are all ready for proper discussions: PM @narendramodi at the start of the Parliament session

As soon as Parliament commenced, members of the Samajwadi Party and TDP jumped into the well shouting against the recent cases of mob lynching in the country and demanding special status for Andhra Pradesh.

The demand for a special status to Andhra Pradesh had prompted BJP ally Chandrababu Naidu to pull out of the NDA earlier this year. Naidu’s opposition in the state, Jaganmohan Reddy’s YSR Congress, held a separate protest outside Parliament with the same demand.

Congress MP Jyotiraditya Scindia said the Opposition had no confidence in a government which has “led farmers to commit suicide and under whose regime women were being raped everyday.”

Congress’ Shashi Tharoor brought up the recent attack on his Kerala office by BJP workers. He said, “The attack wasn't only an attack on a constitutionally provided office but a larger attempt by the ruling party to destroy the idea of India and pluralism. Swami Agnivesh was also attacked. We shouldn't stand by as mob lynching and hooliganism have begun to rule democracy.”

The no-confidence motion will not derail the BJP government which has 273 MPs in the Lok Sabha, plus allies. It is a symbolic attack by the Opposition to make a point against the government and to rally support for a possible coalition.

The monsoon session, which concludes on August 10, will have 18 sittings amid much-expected drama in both the houses -- Rajya Sabha and Lok Sabha.

An all-party meeting was chaired by the Prime Minister on Tuesday for smoothing functioning of the Monsoon Session. The meeting received a "positive" outcome, Union Minister Ananth Kumar said.

However, the Opposition parties, led by Congress, will hopefully eye to target the in-power Bharatiya Janata Party (BJP) over various amendments.

The Congress on Tuesday had said a number of Opposition parties would collectively give a notice for a no-confidence motion against the Modi government in Parliament's Monsoon Session.

Leader of the Congress in the Lok Sabha Mallikarjun Kharge said several parties agreed during a meeting of opposition leaders to work together to bring a no-confidence motion against the government.

Sources said that the Congress was working to move the motion on Wednesday and is in the process of filing a notice in this regard. Kharge said opposition parties will demand grant of special status to Andhra Pradesh, apart from raising issues such as lynchings, atrocities against women and Dalits and dilution of a law meant for SCs.

The government has listed a substantive legislative business for the session. This includes 46 Bills and two financial matters. On priority are The Muslim Women (Protection of Rights on Marriage) Bill or the anti-instant triple talaq bill and The Constitution (123rd Amendment) Bill that gives Constitutional status to the National Commission for Backward Classes.

On a related note, the List of Business or the agendas to be taken up in the upcoming monsoon session are as follows:

I Bills for Introduction, Consideration and Passing

12. The Arbitration and Conciliation (Amendment) Bill, 2018

15. The DNA Technology (Use and Application) Regulation Bill, 2018

II Bills for Consideration and Passing

1. The Constitution (One Hundred and Twenty-Third Amendment) Bill, 2017

4. The Representation of People (Amendment) Bill, 2017

14. The Rights of Children to Free and Compulsory Education (Second Amendment) Bill, 2017

5. The Ancient Monuments and Archaeological Sites and Remains (Amendment) Bill, 2017

6. The Requisitioning and Acquisition of Immovable Property (Amendment) Bill, 2017

7. The Muslim Women (Protection of Rights on Marriage) Bill, 2017

1. Supplementary Demands for Grants (including Railways) for 2018-19