The move comes in the wake of a raging controversy over BJP leader Sadhvi Pragys's remarks supporting Nathuram Godse. 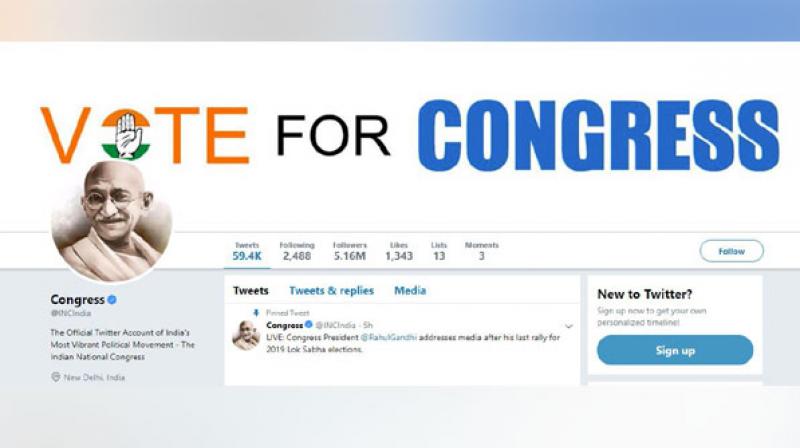 New Delhi: The Congress on Friday changed the profile picture on the party's Facebook and Twitter handle to that of Mahatma Gandhi.

The move comes in the wake of a raging controversy over BJP leader Pragya Singh Thakur's remarks in support of Mahatma Gandhi's assassin Nathuram Godse.

Thakur had on Thursday sparked outrage that cut across party lines after she called Godse a "patriot".

When questioned about actor-turned-politician Kamal Haasan's remark that India's first terrorist was a Hindu (in reference to Godse), she said, "Nathuram Godse was a 'deshbhakt', is a 'deshbhakt' and will remain a 'deshbhakt'."
Thakur had later apologised for her remark.

Earlier in the day, Congress president Rahul Gandhi took potshots at BJP and RSS and said they are "God-Se Lovers" and not "God-ke-Lovers", in a reference to remarks by Thakur and two other BJP leaders in support of Mahatma Gandhi's assassin Godse.

"I finally got it. The BJP and the RSS... Are not God-Ke Lovers. They are God-Se Lovers," Rahul tweeted.

In a damage-control exercise, BJP president Shah took to Twitter and said that whatever they stated were their personal opinions and the party would take an action after seeing their statements seriously.

"Statements of Ananthkumar Hegde, Sadhvi Pragya Singh Thakur and Nalin Kumar Kateel are their personal opinions. BJP has nothing to do with it. They have withdrawn their statements and apologized. BJP has taken their statements seriously and sent these statements to the disciplinary committee," Shah said.

"The disciplinary committee will seek an explanation from all the three leaders and will submit the report to the party within 10 days," he added.

Meanwhile, BJP leader Anil Saumitra was suspended from primary membership of the party over his social media post calling Mahatma Gandhi "the father of Pakistan."

The party has asked him to reply in a week.