Being a BJP supporter so far, MLA Sona Devi accused the BJP of resorting to 'use and throw' policy. 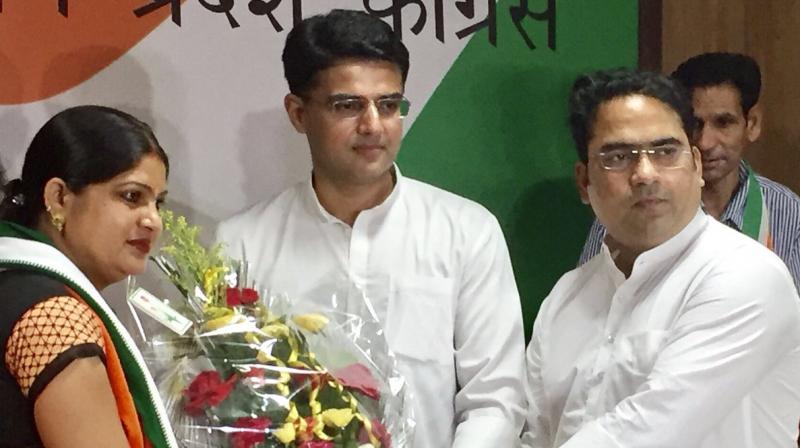 PCC chief Sachin Pilot welcomed Sona Devi in the party on Friday saying that she has joined the party unconditionally and it will boost the party’s standing among the youth, especially among the Dalits. (Photo: Twitter | @SachinPilot)

Jaipur: Ahead of the Rajasthan assembly elections which are scheduled to be held later this year, the Congress on Friday got a shot in the arm when a sitting MLA from a regional outfit joined the party in the presence of PCC chief Sachin Pilot.

Sona Devi, a first-time MLA from Raisingh Nagar in Sriganganagar district, is one of the youngest MLAs aged 27 and also the poorest of the lot with just Rs 61,000.

PCC chief Sachin Pilot welcomed Sona Devi in the party on Friday saying that she has joined the party unconditionally and it will boost the party’s standing among the youth, especially among the Dalits.

“Sona Devi successfully contested the last assembly election from a small local party. She is young and despite coming from a humble background she is well educated. Her presence will strengthen the party in Sriganganagar,” Pilot said.

Sona Devi said that she was upset over the condition of  Dalits across the country especially after the Bharat Bandh outrage that took place on April 2.

“It made me very sad. The BJP has considered Dalits only as a vote bank. We supported the BJP but never got out due,” she said.

According to Sona Devi, who along with fellow party MLA Kamini Jindal had supported BJP candidates in Rajya Sabha and President’s election, accused BJP of “use and throw policy".

In April, she had alleged that the government was not listening to her because she was Dalit.  “The officials don’t pay attention to her suggestions and now allowing her to spend money from her MLA fund,” she alleged.

Sona Devi had also raised questions over the legislative committee for Dalit welfare.

Sona Devi had joined NUZP just before the assembly election in 2013. The party was formed by a millionaire businessman B D Agarwal who got a windfall from skyrocketing ‘gwar gum’ because of rising crude prices that led to a boom in US shale oil industry. His company Vikas WSP is the largest exporter in the world of ‘gwar gum’.