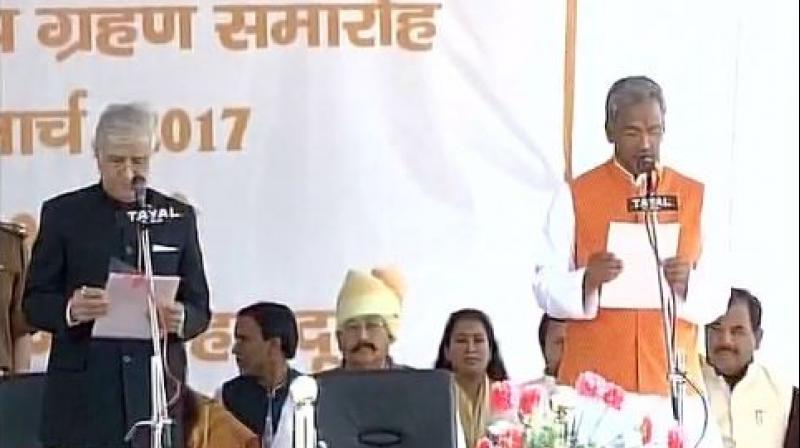 On the other hand, Rekha Arya and Dhan Singh Rawat took oath as minister of state.

Rawat will also hold his first cabinet meeting on Saturday, mere hours after his swearing in.

The BJP’s state legislature party had unanimously elected Rawat as its leader on Friday.

Narendra Singh Tomar, the BJP’s central observer for the legislature party’s meeting, said Rawat’s name was proposed by senior leaders and MLAs — Prakash Pant and Satpal Maharaj — and was seconded by a host of other legislators.

The saffron party won 57 of the total 70 seats in the recently-concluded Assembly elections.

Meanwhile, Rawat defeated Congress' Hira Singh Bisht in the Doiwala constituency with a margin of over 24,000 votes.

He was elected to the assembly for the third time and was state agriculture minister in 2007-2012.

Rawat, who is considered to be close to BJP chief Amit Shah, was given responsibility of regional election in-charge during 2014 Lok Sabha elections in Uttar Pradesh, where the BJP emerged victorious.