Samajwadi Party is a protector of rapists: Smriti Irani

She was referring to an FIR filed today against tainted senior SP minister Gayatri Prajapati in connection with cases of alleged gangrape. 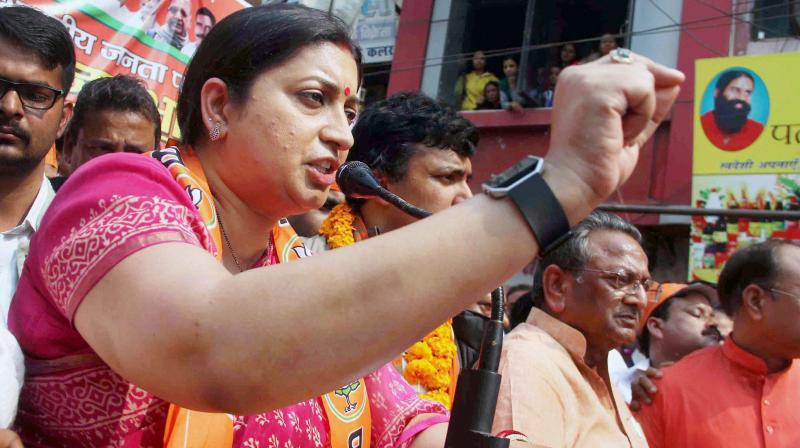 Allahabad: Describing the Samajwadi Party as"protector of rapists", Union minister Smriti Irani on Saturday said its five-year rule will be remembered only for crimes against women.

She was referring to an FIR filed today against tainted senior SP minister Gayatri Prajapati in connection with cases of alleged gangrape and attempt to rape a woman and her minor daughter.

"It is a disgrace that Chief Minister Akhilesh Yadav had in his cabinet a person like Gayatri Prajapati who has been accused of rape. That the court had to intervene and order that an FIR be lodged against the minister proves that SP is a protector of rapists. No wonder under its rule, women of UP have never felt safe", Irani said while addressing a series of election meetings here.

The Supreme Court had yesterday directed the police to book the minister, who is a senior leader of the ruling Samajwadi Party.

Irani, who is a former national vice-president of the BJP, said "the five-year rule of SP will be remembered only for the high incidence of crimes against women, land grabbing and a free rein to marauding gangsters."

She also lambasted the "discredited" Congress for its truck with the SP and claimed voters will teach a lesson to their "opportunistic alliance".

"That the Congress has been discredited across the country is evident from its drubbing in the Lok Sabha polls followed by its losing state after state in assembly polls.

"Congress, SP and BSP therefore stand no chance of coming back to power in UP, whether they fight separately or in coalition", she said.

She claimed that the people of UP have become fed up with SP and BSP which have alternately ruled the state for more than a decade.

Amid "this gloomy situation", the people are looking at the BJP with hope. Their hopes have only been strengthened by the example of development-oriented Narendra Modi government, she said.

"The party, once its comes to power in UP, will root out corruption, take lawbreakers to task and help the state realise its full potential. The people will definitely vote for us and teach a lesson to the opportunistic alliance of SP and Congress", Irani, who holds the Textile portfolio, added.