Deputy Chief Minister Manish Sisodia and Health Minister Satyender Jain, too, were not allowed to travel outside the country. 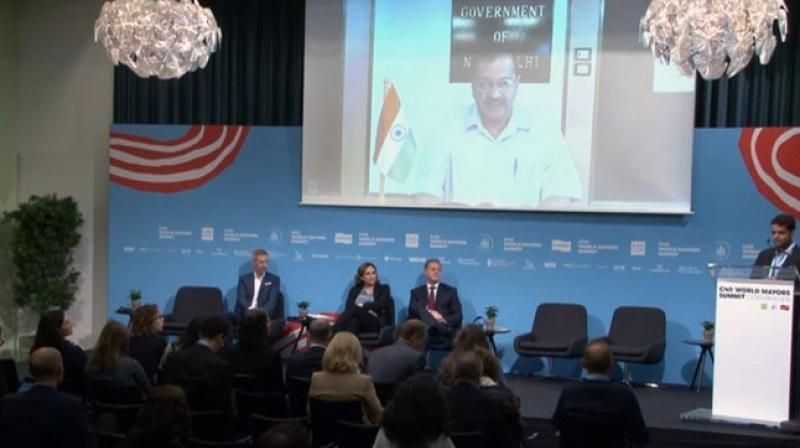 Kejriwal could not attend the C-40 Climate Summit in Denmark on October 11 after the Ministry of External Affairs refused political clearance to his visit. He addressed it through video link. (Photo: YouTube screengrab/ C40CitiesLive)

New Delhi: Breaking his silence on his cancelled visit to Denmark, Delhi Chief Minister Arvind Kejriwal on Wednesday said the reality of the BJP was exposed before the world when the centre did not allow him to travel to the country for a conference on climate change.

"BJP did not let me go but I was happy that the organiser asked me to participate through video conferencing. This is not my pride but pride of you people (volunteers)," he said, according to a video shared by his Aam Aadmi Party.

Kejriwal could not attend the C-40 Climate Summit in Denmark on October 11 after the Ministry of External Affairs refused political clearance to his visit. He addressed it through video link.

Addressing party volunteers in his first closed-door meeting in Dwarka ahead of the assembly election due early next year, Kejriwal said their work gained more popularity when they were not allowed to travel.

These are the first comments made by Kejriwal over cancellation of his visit to Denmark. Earlier, the AAP had hit out at the centre for denying permission to him.

The centre has defended denying permission to Kejriwal to attend the summit, saying it was meant for "mayor-level" participants.

Kejriwal hit back, saying their (BJP's) mayors were not invited for the conference. He said the BJP was "exposed" when the centre refused permission to him to travel to Denmark.

"I heard a BJP leader say that what will Kejriwal do in a mayors' conference, but he does not understand that their mayors were not invited for such conferences. What can we do if their mayor isn't invited?" Kejriwal said.

All the three municipal corporations in Delhi are run by BJP mayors.

He said, in a similar manner, Deputy Chief Minister Manish Sisodia and Health Minister Satyender Jain, too, were not allowed to travel outside the country.

"The world is talking about us. The whole world came to know what kind of party BJP is and we are being lauded around the world for our work," Kejriwal said.