During the 2002 Gujarat riots, a five-month pregnant Ms Bano, then 21, was gang-raped by a mob and seven members of her family 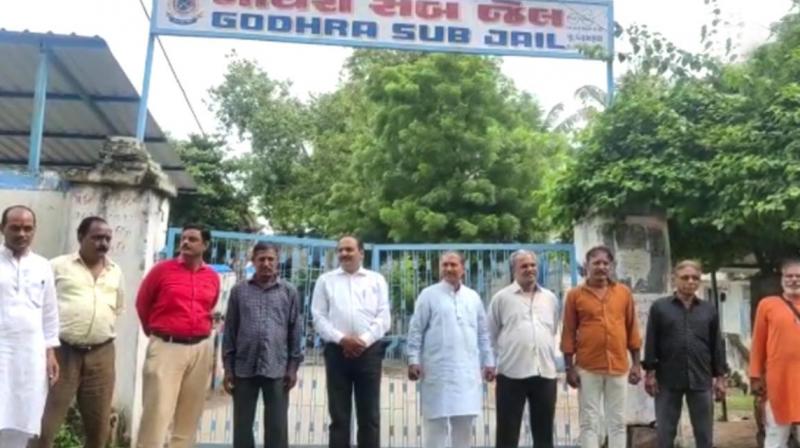 11 convicts in the Bilkis Bano 2002 riots case were released by the Gujarat government. (Image credit: Twitter)

New Delhi: A huge uproar broke out against the release of 11 convicts in the Bilkis Bano 2002 riots case by the Gujarat government. Though the BJP remained tight-lipped, the state government came under severe criticism from all quarters, especially the Opposition, over its decision to set free the convicts undergoing life imprisonment for rape and murder under its remission policy.

During the 2002 Gujarat riots, a five-month pregnant Ms Bano, then 21, was gang-raped by a mob and seven members of her family, including her 3-year-old daughter, were murdered in the communal flare-up. The state government allowed the release of the 11 prisoners convicted for the crime despite a notification by the ministry of home affairs in June that said rape convicts cannot be released under a special release policy for convicted prisoners as part of the "Azadi Ka Amrit Mahotsav" celebrations.

On its part, the Gujarat government maintains that it released the men following the state government’s own policy in keeping with the Supreme Court's directions in May to consider a remission plea by one of the convicts.

Reacting to the news, Ms Bano's husband Yakub Rasul said they were surprised after hearing about the release of all the 11 convicts. Rasul said he, his wife and five sons, the eldest now aged 20, continue to live without a fixed address, more than 20 years after the incident.

Given that the release comes close to the Gujarat Assembly elections, due by the end of the year in which the BJP is aspiring for a sixth straight term in power, politicking over the matter has begun. The Congress, AIMIM, RJD, CPI-M, TMC slammed the BJP government in Gujarat for the move.

Terming the decision "unprecedented", Congress spokesperson Pawan Khera said that the decision brings out the BJP Gujarat government’s mindset. Citing Prime Minister Narendra Modi’s Independence Day statement wherein he talked about women power and respecting them, Mr Khera at a press conference in Delhi questioned whether the PM meant what he said.

"You let off the convicts citing the 14 years spent by them of their sentence, that their conduct in jail was good and the nature of the crime… If we just consider the nature of the crime, does rape not come in the category that the harshest punishment be given, that any sentence is not enough? And we saw today that those who were let off, they are being felicitated and honoured. Is this Amrit Mahotsav?" asked Mr Khera.

The Congress leader reminded Mr Modi of "Raj Dharma" that the former PM Atal Bihari Vajpayee, whose death anniversary was on Tuesday, had once talked about during his visit to Gujarat after the 2002 riots. "PM Modi should come forward and clarify if what he said in his Red Fort speech were just words, with no meaning. Does the PM not mean what he says? Or is it that his own party, its governments have stopped listening to him? ... Or does he say one thing to the country and another to his own party’s government? ... Either the Gujarat government should take back its order, or PM Modi should take back his words?" Mr Khera said.

AIMIM chief Asaduddin Owaisi said the release of these 11 convicts is "appeasement politics" ahead of the state elections in Gujarat. "It is more unfortunate as the Prime Minister talked about more power to women from Red Fort on Independence Day. It is sending a wrong message to the Muslim community and sets a wrong precedent. This is again a crime committed against Bilkis Bano. Fresh wounds are given to Bilkis Bano. I hope good sense would prevail in the BJP," Mr Owaisi said.

He added, "This is the BJP’s version of Azadi ka Amrit. People who are guilty of a heinous crime have been given freedom. BJP’s bias for a religion is such that even brutal rape and hate crimes are forgivable."

The CPI-M too condemned the Gujarat government’s order. "CPI (M) strongly condemns Gujarat government's remission of life sentence given to gangrapists and killers of 2002 genocide in the Bilkis Bano case. This is the real face of New India—convicted killers and rapists released. Activist Teesta who fought for justice was jailed," tweeted the party.

TMC spokesperson Saket Gokhale tweeted that the Gujarat government has released "All 11 monsters who were convicted of this heinous crime" against Bilkis Bano. "Where’s the outrage? Not even a whimper." he asked.