The Congress legislature party too met but put off the process of choosing a CLP leader while extending support to the JD(S). 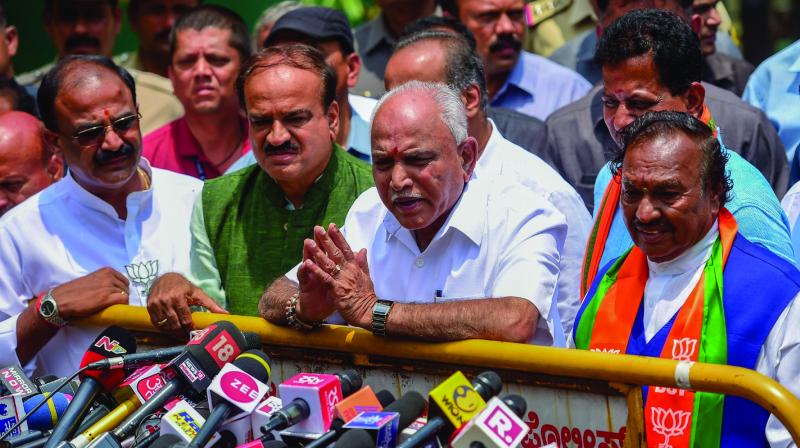 Bengaluru: Ending the agonising wait for a new government that began soon after Tuesday’s counting of votes, Karnataka governor Vajubhai Vala on Wednesday invited BJP legislature party leader and former chief minister B.S. Yeddyurappa to form the government and also to prove his majority on the floor of the Assembly within 15 days.

The governor’s letter came after two days of intense lobbying for power amid allegations by the Congress that the BJP was resorting to bribery and horse-trading to muster the required numbers.

After the counting of votes on Tuesday, the BJP had secured 104 seats in the 224-member House while the Congress won 78 and the JD(S) 38 seats. Elections are yet to be held to two seats.

In a hurried bid to prevent the BJP from  grabbing power in the southern state, the Congress and JD(S) patched toge-ther a coalition which had a total strength of 117 MLAs, including an Independent. Coalition leaders, including the CM nominee and JD(S) state president H.D. Kumaraswamy, met the governor twice in the past two days and cited past precedents, including that of Goa, where the single largest party — Congress — was not invited to form the government.

The BJP too kept up the pressure on the governor, saying that the largest single party should be given the first chance to form the government. In the meantime, Mr Yeddyurappa was selected leader of the BJP legislature party and Mr Kumaras-wamy chosen as head of the JD(S) legislature party. The Congress legislature party too met but put off the process of choosing a CLP leader while extending support to the JD(S).

It remains to be seen how the veteran BJP leader will secure the required number — 113 — as both the Congress and the JD(S) have whisked away their MLAs to resorts in Bengaluru and elsewhere to prevent the saffron party from poaching on them. The BJP still needs the support of nine more MLAs to cross the halfway mark and it will be interesting to see if it will try to lure Congress and JD(S) MLAs or by some means make them abstain from the voting process when the motion of confidence is moved in the Assembly.

Mr Yeddyurappa who belongs to the dominant Lingayat community, had earlier served as CM from 2008 to 2011 and also as deputy CM in 2006-07 when the BJP and the JD(S) had formed a coalition and entered into a 20-20-month power-sharing arrangement. However, in 2007, the coalition fell apart after the then CM, Mr H.D. Kumaraswamy, refused to give up power to the BJP at the end of 20 months.