TMC chief is ready to back a consensus on re-election of Pranab as President; set to meet Sonia again after 10 days. 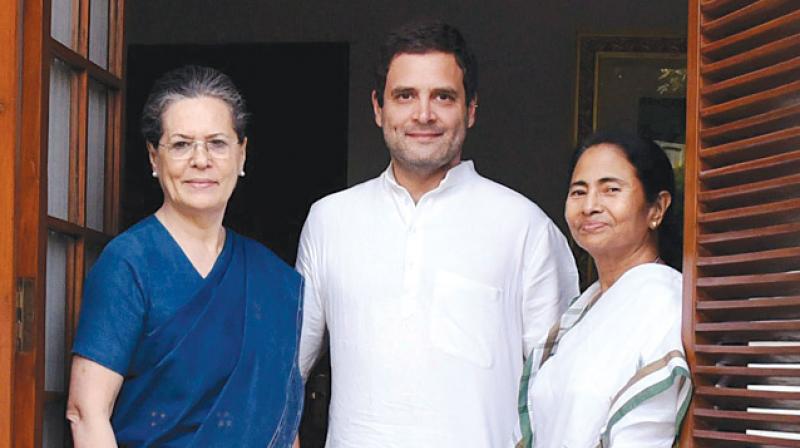 New Delhi: West Bengal chief minister and Trinamul Congress supremo Mamata Banerjee met Congress president Sonia Gandhi here Tuesday and discussed possible names for a consensus Opposition presidential candidate. She is learnt to have told the Congress president her party was fine with the re-election of President Pranab Mukherjee if there was a consensus on him.

The two leaders also discussed the need for Opposition unity amid the politics of “vendetta” being played out by the ruling party. Congress vice-president Rahul Gandhi was also present at the meeting.

“Some political vendetta is going on, discussed that in detail. Will meet again within the next 10 days to decide on the consensus candidate,” Ms Banerjee told reporters after the meeting.

She said she had a detailed discussion with Mrs Gandhi on the presidential polls as well as the current political situation. “There is still time and we will meet again. But the government  should also take the initiative for a consensus candidate,” she said.

Congress sources told this newspaper that though Ms Banerjee had agreed to the name of former West Bengal governor Gopalkrishna Gandhi as a possible Opposition candidate, she was also agreeable to a second term for Mr Mukherjee.

Bihar chief minister and JD(U) president Nitish Kumar had said on Monday that he was in favour of Mr Mukherjee being a consensus candidate for President, but added that it was up to the ruling party to take the first step in this regard. The Left parties had already proposed Mr Mukherjee’s name for re-election.

The Congress sources said they would have no problem with Mr Mukherjee as a consensus candidate, but it should not appear the party was trying to thrust the name on others, and thus it was waiting for all parties to come on board first.

The Trinamul chief’s meeting with Mrs Gandhi was one of several that the Congress president has had with other Opposition leaders to try and reach a consensus on the name of a joint Opposition candidate for President.

Mrs Gandhi is also due to meet BSP supremo Mayawati soon and has spoken over the phone with the SP’s Mulayam Singh Yadav.

Taking forward Opposition camaraderie, Ms Banerjee on Tuesday also supported RJD chief Lalu Prasad Yadav, who has been at the receiving end of income-tax raids at his offices and residence since the morning. Lalu Yadav had tweeted: “BJP says they will jail me asap so our proposed 27th Aug Maha-Rally can’t take place. My name is Lalu and I pity such intimidators.”

Responding to this, Ms Banerjee said: “Lalu Ji we accepted your invitation to be there on Aug 27. We will be there.”

Top Trinamul leaders are also facing a probe into the Narada bribery scam and the Saradha chit fund scam. Taking a veiled dig at the government, she said: “If you do not like someone, then you send in the CBI, then put him in jail.”