India   Politics  17 May 2017  AAP once looked beyond Delhi; now has to mind home turf
India, Politics

AAP once looked beyond Delhi; now has to mind home turf

The latest attacks on the party -- allegations of financial irregularities in donations -- have seriously dented the party's reputation. 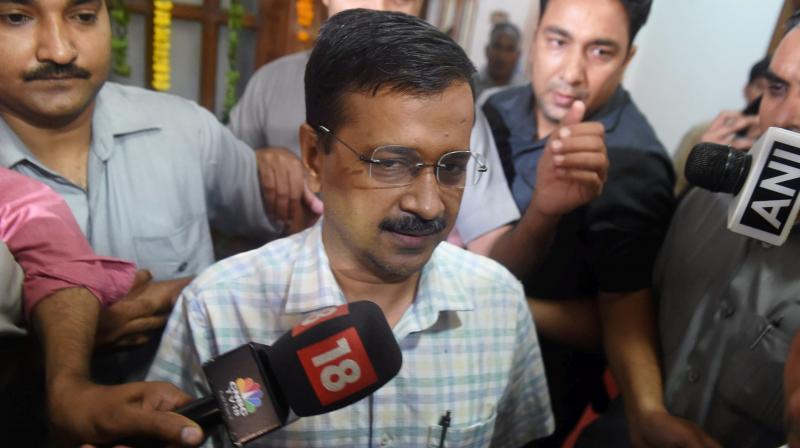 New Delhi: The Aam Aadmi Party (AAP), which came riding a wave of popular support, seems to have been grounded. Two years after it took over the reins of Delhi and set its eyes on expanding at the national level, chief minister Arvind Kejriwal's party is struggling on its home turf.

Delhi today, the nation tomorrow was the party's unsaid motto soon after it won a decisive victory against the Congress and the Bharatiya Janata Party (BJP) in the 2015 Assembly election.

But plagued by a series of poll defeats, internal strife, allegations of graft and constant run-ins with the Centre, the party now has a more immediate task at hand -- to set its home in order.

"The party is facing a crisis," says political analyst Sanjay Kumar, adding that if elections were to be held today, AAP would be "wiped out".

The latest attacks on the party -- allegations of financial irregularities in donations coupled with bribery charges against Kejriwal by his one-time confidant, Kapil Mishra -- have seriously dented the party's reputation.

"Politics is all about perceptions and images. Had someone else levelled these allegations against Kejriwal, people would have said this was a part of politics. But the recent allegations levelled by a senior member of the party (Mishra) are serious," Kumar, a professor at the Centre for the Study of Developing Societies (CSDS), says.

Vishwas had differed with the party leadership's claim that rigged electronic voting machines were behind the party's rout in the recent assembly elections in Punjab and Goa.

But these are just recent developments. Trouble has been brewing in AAP ever since it marked a stupendous win in the Delhi Assembly polls, bagging 67 out of 70 seats, in 2015.

The party edifice began to crumble when in 2015 Kejriwal sacked two prominent faces and founder members of the party, Yogendra Yadav and lawyer Prashant Bhushan, who later formed an outfit called Swaraj India.

Since then, Kejriwal has sacked four of his ministers on grounds that range from alleged corruption and forging of degrees to sexual abuse.

Five MLAs and two of its four MPs from Punjab have rebelled against Kejriwal. One lawmaker quit the party to join the BJP just before the MCD polls.

The party has not made inroads into other constituencies such as student unions. That it has not made an impact in student politics was underlined when it did not contest the Delhi University Students Union (DUSU) polls, a platform that indicates a party's grip on student politics in the national capital, after it was defeated in the university polls in 2015.

This year marks a series of lows for the party, which did not perform well in Punjab, fared poorly in Goa and faced humiliating defeats in the Rajouri Garden by-poll and MCD election in the city.

In Delhi, the party has been sliding. In the 2015 assembly elections, AAP had 54.3 per cent of the vote share, which declined to 26.21 per cent in the MCD polls--- less than half in two years. It even had its deposit forfeited in the Rajouri Garden by-poll, which the BJP won.

People are seemingly disillusioned by the government -- despite the popular measures it has taken in the last two years, including subsidies in water and electricity tariffs and execution of flagship programmes such as neighbourhood health clinics and improvement in government school standards.

Old supporters, such as Surender Patwar, an auto driver who campaigned along with other autorickshaw drivers for AAP in 2013 and 2015, believe Kejriwal has not stood up for them.

"We campaigned for him but what has he done for us? Instead, he encouraged cab aggregators and even e-rickshaw drivers," Patwar says.

On the administrative front, the Delhi government's frequent run-ins with the Centre have not helped Kejriwal either, leading to the public perception that the chief minister is often caught in confrontation.

But there's more trouble round the corner. Over 20 of his MLAs may be disqualified in an Office of Profit matter pending before the Election Commission.

Post defeat, parties once seen cosying up to AAP after its spectacular assembly victory are now critical of him.

The Left, which campaigned with AAP against the Modi government and the BJP on issues such as the suicide of Dalit scholar Rohith Vemula and on the arrest of JNU student leader Kanhaiya Kumar, is now looking at AAP with concern.

Atul Kumar Anjaan, national secretary, CPI, says Kejriwal promised he would bring transparency to public life, but has not delivered.

"People are thinking why is it that most of their MLAs have police enquiries and cases against them, why three or four of his ministers have had to resign. This has lowered his prestige. And now his own colleagues are challenging him. He has to tell the truth," Anjaan says.

Jaju, says that because Kejriwal is such a "disappointment", all AAP candidates will lose their deposits if assembly polls are to be held now.

"The gap between the expectations Kejriwal had raised and the reality of his government's performance is huge. People feel betrayed. Forget about any AAP candidate winning his seat, all of them will lose even their deposits," he says.

AAP leader Ashutosh, however, does not agree that the internal strife and the recent poll defeats reflect that people are upset with Kejriwal or the party.

He instead blames the BJP for its "witch hunt" against AAP. "When Sheila Dikshit was the chief minister of Delhi, her party (the Congress) lost the MCD polls twice," he points out.

The AAP leader also does not agree with the view that the party fared dismally in the recent state polls. "If people are calling our performance in Goa and Punjab poor then they have high expectations from us because as a nascent party we are a principal opposition party in Punjab and garnered six per cent votes in Goa. Even the BJP did not attained such a feat in such a short time," he says.

Buoyed by its rise in the vote share in MCD polls, Randeep Surjewala, AICC in-charge of communications, says the the Congress party is "fully geared up" to take on both the AAP and the BJP in possible by-polls, if the Office of Profit case against the 20 MLAs leads to their disqualification.

"The very fact that our vote share has gone up from 9 per cent to 23 per cent in the MCD polls is an indicator of our acceptability," Surjewala says.

If the traditional vote bank of the Congress returns to its fold, AAP's woes will increase. The humiliating defeat in MCD polls is an indication of that.