Citizen Bill could be reality in July: Ram Madhav

The National Register of Citizens (NRC) is also going to be published in the same month. 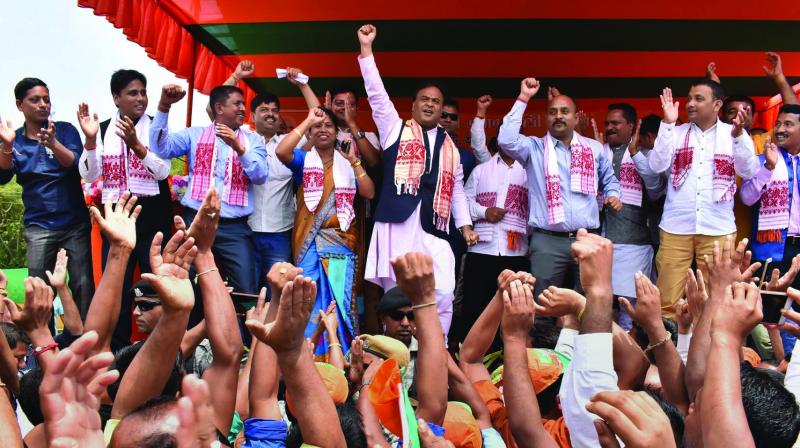 BJP leader Himanta Biswa Sarmah dances with the crowd during an election campaign rally at Bahjani in Nalbari district of Assam on Tuesday in support of the party candidate Dilip Saikia of Mangaldoi parliamentary constituency. (Photo: PTI)

Guwahati: The BJP general secretary Ram Madhav who on Tuesday reiterated the commitment of the BJP to bring in Citizenship (Amendment) Bill in the parliament predicted that the Bill could be a reality in July. The National Register of Citizens (NRC) is also going to be published in the same month.

In what may be called an attempt to woo the Hindu Bengali voters, Mr Madhav addressed a press conference at Silchar in Southern Assam’s Barak Valley on Tuesday and said, “The National Register of Citizens (NRC) is going to be published by July end. Citizenship (Amendment) Bill, will also come by then in the parliament. Once these tools come into effect, the issues relating to foreigners will be resolved,” said Mr Madhav assuring the people that their woes regarding citizenship would end soon.

He admitted that they have agreed to find some middle ground on the Citizenship (Amendment) Bill to address the concerns that is being expressed by different alliance partners as well as different sections of the people in the Northeast. He, however, asserted, “We are also committed to deliver on our promise to the persecuted people.”

It is significant that the regional Asom Gana Parishad (AGP) had walked out of BJP-led alliance as the Bill, passed by Lok Sabha and pending in the Rajya Sabha seeks to amend the Citizenship Act, 1955, by relaxing eligibility rules for getting Indian citizenship for immigrants belonging to six minority (non-Muslim) religions — Hindus, Sikhs, Buddhists, Jains, Parsis and Christians — from neighbouring Afghanistan, Bangladesh or Pakistan.

It is seen in Assam and Northeast as a “threat” to the indigenous communities of the region as it goes against Assam Accord provision, which says that any person who came into Assam after midnight of March 24, 1971, would be identified as a foreigner.

Mr Madhav who was in Silchar also refuted charges of politicisation of services in the ongoing election campaign and instead claimed that the party leaders cite the services to highlight the valour and commitment of the armed forces towards national security.