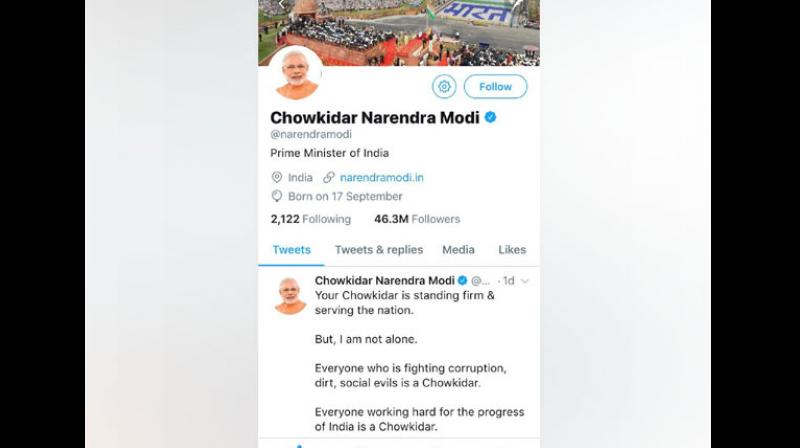 On Saturday, the Prime Minister had tweeted a video showing how all Indians are chowkidars while flagging off the BJP's poll campaign. (Photo: Twitter)

On Saturday, the Prime Minister had tweeted a video showing how all Indians are chowkidars while flagging off the BJP's poll campaign.

"Your Chowkidar is standing firm & serving the nation. But, I am not alone. Everyone who is fighting corruption, dirt, social evils is a Chowkidar. Everyone working hard for the progress of India is a Chowkidar. Today, every Indian is saying-#MainBhiChowkidar," he tweeted.
The origin of the word 'chowkidar' dates back to the poll campaigning ahead of the 2014 general elections when Modi had promised to work as a 'chowkidar' to guard the people's money and their trust once elected to the top office.

'Main Bhi Chowkidar’ has been started after extensive surveys and data analysis by BJP strategists who feel that Congress president Rahul Gandhi’s 'chowkidar chor hai’ jibe and campaign is not resonating among people. The surveys also suggested that it is actually angering people in the country, according to a release.

This campaign is expected to drive the narrative of the Prime Minister’s strong and decisive image which multiple surveys have conveyed is the main factor in the upcoming elections, the release mentioned.

Under the aegis of this campaign, the BJP has leveraged a tech innovation called conversation cards on Twitter, whereby people will get a personalized message from the Prime Minister on Twitter on participating in this campaign.

Prime Minister Modi is slated to interact with people from across the country on March 31 as a part of this campaign.