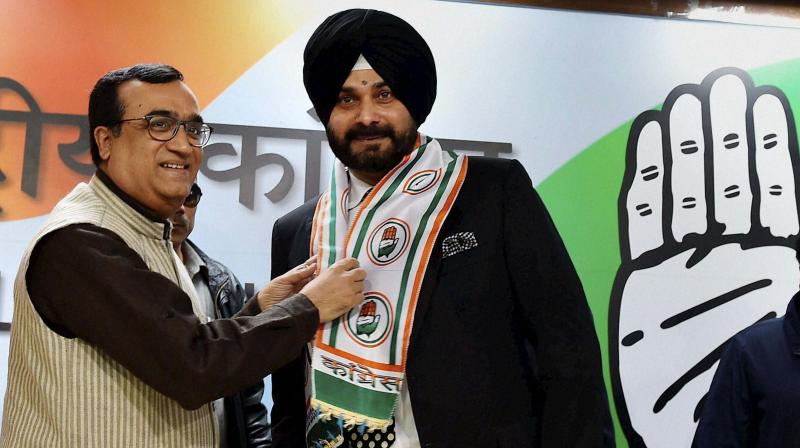 DPCC President Ajay Maken presents the party scarf to Navjot Singh Sidhu as he is welcomed at a press conference a day after his joining the Congress party at AICC headquarters in New Delhi. (Photo: PTI)

New Delhi: Crickter-turned-politician Navjot Singh Sidhu, who joined the Congress on Sunday after months of talks, said Monday that his battle was for the “redemption of Punjab”.

After quitting BJP, and failed negotiations with the AAP, Mr Sidhu said joining the Congress party was like “ghar wapsi” (homecoming), and that he was a “born Congressman.”

Mr Sidhu is now set to contest from Amritsar (East) Assembly constituency. Punjab Congress chief Captain Amarinder Singh will contest from both the constituencies of Lambi and Patiala.

He opened his innings with the Congress by launching a blistering attack on the Shiromani Akali Dal (SAD) leadership. In his inimitable style, he said, “Bhaag baaba Badal bhaag, kursi khaali kar, Punjab ki janta aati hai (run away Badal, people of Punjab are coming)”

Mr Sidhu also did not spare his former outfit — BJP. Referring to remarks that BJP was like “his mother, whom he betrayed”, Mr Sidhu quoted from the Ramayana. Without mentioning BJP, he said, “Kaikeyi was also a mother, who banished her son to the forest for 14 years.” He also referred one BJP leader as “Manthara”, the humpbacked maid in the Ramayana, who convinced queen Kaikeyi that the throne belonged to her son, Bharata, and that her stepson, the crown-prince Lord Rama, should be exiled from the kingdom.

Mr Sidhu declined to idenfity his “Manthara”. Mr Sidhu Congress was like “Kaushalya”, who gave birth to Lord Rama. On whether he would stake claim to the CM’s post if the Congress came to power, Mr Sidhu, “It is premature to talk about the issue.”