Modi also asked the members to ensure the presence of ruling alliance members in both the Houses. 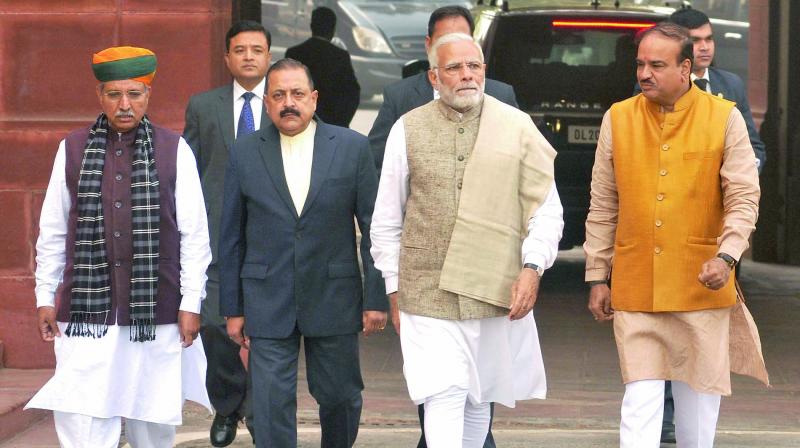 New Delhi: Prime Minister Narendra Modi on Friday asked the NDA members to strongly push the government’s agenda in Parliament and not to get bogged down by the Opposition’s protests. Mr Modi also asked the members to ensure the presence of ruling alliance members in both the Houses.

Rajya Sabha witnessed multiple adjournments on the first day of the Winter Session after Congress-led Opposition demanded an apology and explanation from Mr Modi over his criticism of former Prime Minister Manmohan Singh during Gujarat campaigning.

Parliamentary Affairs minister Ananth Kumar, who briefied the media after the NDA floor leaders meeting, demanded that the Congress apologise for a meeting between its leaders, including former Prime Minister Manmohan Singh, and Pakistani officials without informing the government.

The Rajya Sabha proceedings were adjourned till Monday following the opposition’s relentless protests. Sources disclosed the Prime Minister referred to India’s progress on several fronts, including its jump in the ease of doing business ratings, and reform measures such as the GST to underline his government’s “able” handling of the economy.

Mr Modi, it was learnt, spoke about the government’s legislative agenda for the Winter Session and asked them to work together for pushing it through Parliament. Earlier, BJP parliamentary party executive also met to chart out strategy for the winter session.