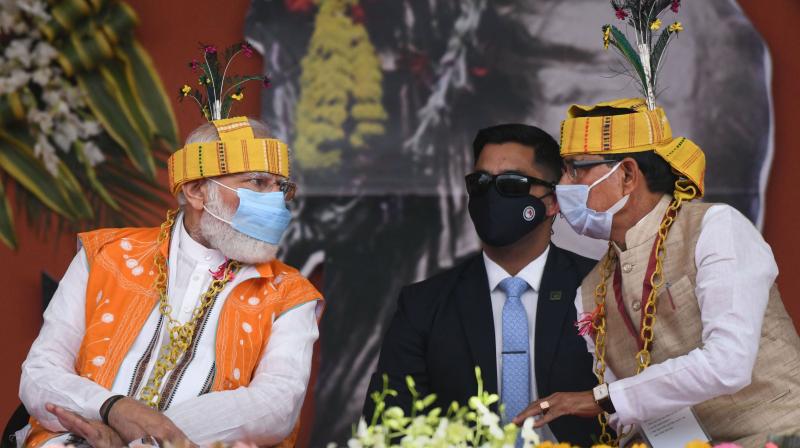 Bhopal: Reaching out to tribals, Prime Minister Narendra Modi on Monday lauded their contribution to Indian culture through the ages and said Lord Ram drew inspiration from them during his exile. Slamming the Congress for "neglecting" adivasis during its previous rules, he said that tribals are now partners in the country's development and benefitting from various welfare schemes launched by the BJP-led government.

Addressing ‘Janjatiya Gaurav Divas Maha Sammelan’ organised here to mark the birth anniversary of revered tribal leader and freedom fighter Birsa Munda, Mr Modi said that the contribution of tribal communities to nation building, which had been ignored for decades, is now being honoured “with pride”.

For the first time since Independence, India is celebrating ‘Janjatiya Gaurav Divas’ to honour the art and culture of tribal society, he said and added that some people in the country were not aware of the contributions made by tribals towards the freedom movement and nation building since the country was not told about it.

“They cannot imagine that tribal society played a major role in enriching India’s culture because the country was either kept in the dark about it or not told fully about it as those who governed the nation for decades after Independence chose to pursue their selfish politics,” the PM said and added that the world was shocked when members of tribal communities reached Rashtrapati Bhavan to receive Padma Awards.

He lamented that the resources in tribal areas were exploited but little was done for the development of tribals who comprised 10 per cent of the population of India.

“It is our duty to bring before the country the heroics of tribal leaders during the freedom struggle to introduce them to the new generation,” he said.

Drawing on history and referring to the Ramayana period, the PM said Lord Ram drew inspiration from life of tribals when he was in exile and stayed inside forests.

The time spent with tribals made a huge impact and turned a prince into the most perfect man. Lord Ram drew inspiration from every aspect of forest dwellers' life, Mr Modi said.

The country cannot forget the bravery of Gond queen Durgawati or the sacrifice of Rani Kamlapati, he said and recalled how people of the Bhil tribe helped Rajput king Maharana Pratap.

The struggle of Veer Maharana Pratap cannot be imagined without the brave Bhil tribe who fought shoulder to shoulder and made sacrifices, Mr Modi said.

“We owe a lot to the tribal people," he added.

He also dedicated to the nation multiple initiatives of railways in the state.

Speaking on the occasion, the PM said not only the railway station has been modernised, its importance has increased with the linking of the name of Rani Kamlapati to the station.

“Railways’ pride is now linked to the pride of Gondwana,” he said.