Shah talks of 'Mission 75' at Jind rally, slams Cong for not revoking Article 370

'The region will move on the path of development under the leadership of Prime Minister Modi,' Shah said. 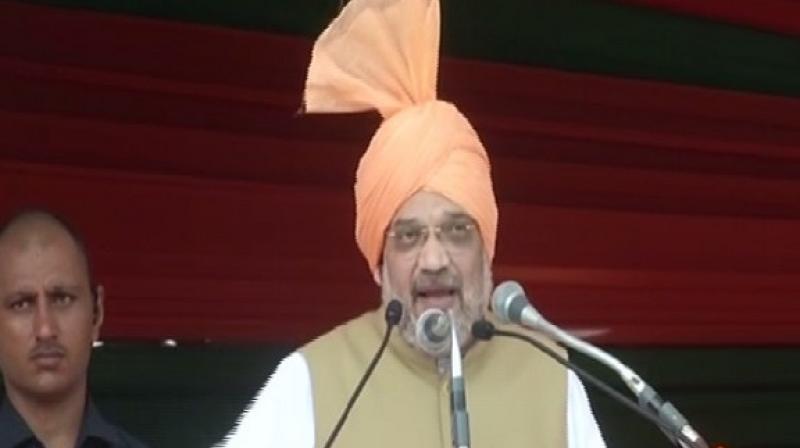 The Home Minister further said, "There is an investment of Rs 200 crore to make an airport at Hisar. (Photo: ANI)

Jind: Union Home Minister Amit Shah on Friday said the BJP has a target to win 75 seats in Haryana Assembly polls, which are scheduled to be held in October this year. He also attacked the Congress party for not removing Article 370 from Jammu and Kashmir.

Addressing the BJP's 'Aastha rally' here in the presence of a galaxy of party leaders including Chief Minister Manohar Lal Khattar, Shah said: "Five years ago when I came here, then with 45 seats BJP formed the government in the state."

"This time we are looking to get 75 seats with the support of people of the state. This is BJP's 'Mission 75' which needs support from the state's people," he said.

Speaking about the revocation of Article 370 from Jammu and Kashmir, Shah said: "Article 370 was a hurdle in the way of Sardar Vallabhbhai Patel's dream of one India. The work that the Congress governments couldn't do in 70 years for the sake of vote bank, Prime Minister Narendra Modi did in just 75 days."

"It is a milestone for the unity of India. Now the roadblocks against the development of Jammu and Kashmir and Ladakh are removed. The region will move on the path of development under the leadership of Prime Minister Modi," Shah said.

"Our Prime Minister never got indulged in the politics of vote bank and made decisions for the sake of the country. Now Article 370 has become a part of history."

Speaking about women's security, the Union Minister said: "As many as 32 women police stations are running in the state. There are 181 buses in the state for women. The sex ratio has increased from 871 to 918."

"In eight districts and 4,000 villages of the state, 24-hour electricity is provided," he said.

The Home Minister further said, "There is an investment of Rs 200 crore to make an airport at Hisar. There will be a development of highway from Jind to Sonipat. The electrification of the railway line from Jind to New Delhi has started."