Kerala’s concern over its reported exclusion from the priority list of the national highway development. 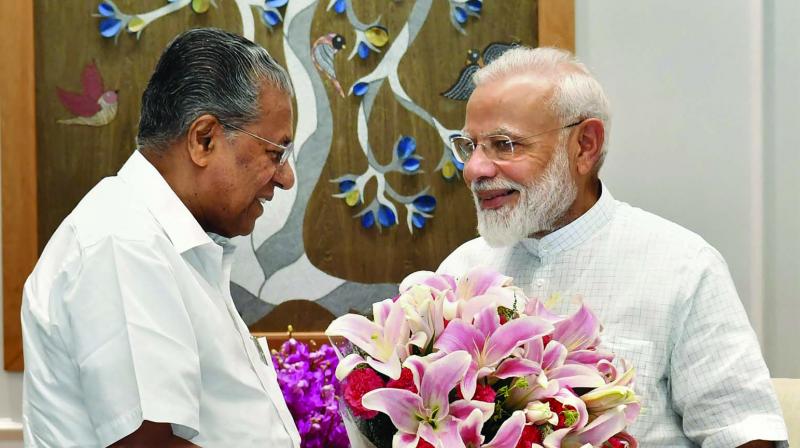 New Delhi: Kerala chief minister Pinarayi Vijayan called on Prime Minister Narendra Modi at his residence on Saturday and expressed the state’s reservation on the privatisation of Thiruvananthapuram international airport.

This is for the first time that the Left leader was meeting Mr Modi after he assumed office for the second time following the BJP-led NDA’s victory in the Lok Sabha polls.  Mr Vijayan is in New Delhi to attend the Niti Aayog meeting. During the brief meet, attended by state PWD minister G. Sudhakaran and Chief Secretary Tom Jose, Vijayan submitted a memorandum citing various demands including further aid for rebuilding the flood-hit state.

Official sources said the chief minister requested the Centre to retain the airport in the public sector and not to hand over its management to any private company.

Kerala’s concern over its reported exclusion from the priority list of the national highway development and the need to get more central assistance for various projects also figured in the discussion, which lasted for around 15 minutes, they added.

The Adani group had, in February, won the bid to operate five out of six airports, including the one at Thiruvananthapuram, proposed for privatisation by the central government. The state government had earlier appealed to the Centre to reconsider its decision to lease out Thiruvananthapuram aerodrome for operation, management and development under the public-private partnership (PPP).

Meanwhile, Karnataka chief minister H.D. Kumaraswamy Saturday asked the Centre to extend GST compensation beyond five years, saying that the state will face “severe financial crunch” after the recompense period ends in 2022. He was speaking at the first meeting of the Governing Council of Niti Aayog chaired by Prime Minister Narendra Modi.

While implementing the Goods and Services Tax (GST), the Centre had assured the states to compensate them for loss of their revenue for five years till 2022.

“While the revenue gap is being bridged by the assured compensation till 2022, the state has limited scope to mobilise additional revenue thereafter,” Mr Kumaraswamay said. It is evident that at the end of 2022-23, there would be a steep fall in revenues of the state as compared to the protected revenue of 2021-22 which would have accrued to the state due to the constitutionally guaranteed compensation, he said. “This would adversely impact developmental and other infrastructural projects implemented in the state as well as committed expenditure of the state government, he added.