He said the voters have already guaranteed a majority for the Bharatiya Janata Party (BJP). 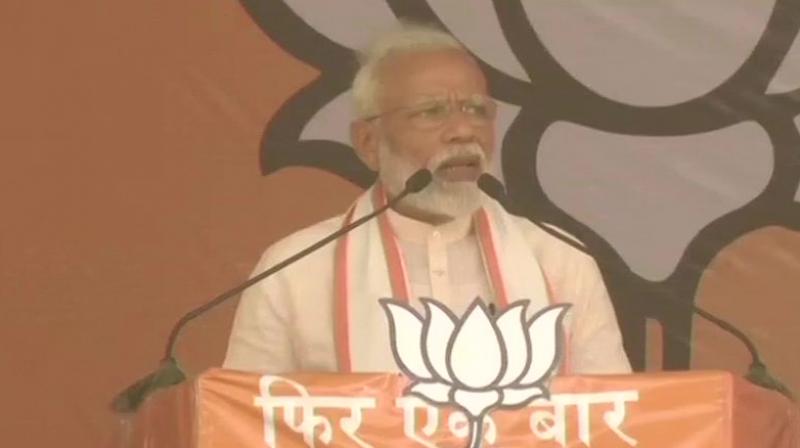 The Prime Minister said that the young voters of the country are convinced that only BJP government can fulfil their dreams. (Photo: ANI twitter)

Chandauli: With only two days left for the conclusion of the Lok Sabha elections, Prime Minister Narendra Modi on Thursday exuded confidence over BJP's victory asserting that the country is saying "phir ek baar Modi sarkar" (Modi government once again).

Addressing an election meeting here, he said the voters have already guaranteed a majority for the Bharatiya Janata Party (BJP).

Modi took a jibe at the Opposition saying that those with a limited number of seats are dreaming of becoming the Prime Minister.

The Prime Minister said that the young voters of the country are convinced that only BJP government can fulfil their dreams.

In an apparent reference to previous Congress government, the Prime Minister said, "Young voters are convinced that only this government can fulfil their dreams. The poor have also realised this. The youth of the nation is not ready to send the country back to the phase before 2014. It was a phase when people used to read more about corruption cases in newspapers almost every day, terror blasts were in peak during that phase, the inflation rate was high. Hence, to change this situation, you chose our government."

"This is a country of bravehearts. Those who opposed and raised questions over surgical strikes are also opposing the bravehearts. Is opposing Citizenship Bill, NRC, Triple Talaq, and Modi right?" he added.

He claimed that when Samajawadi Party (SP) and Bahujan Samaj Party (BSP) were in power in Uttar Pradesh, they would distribute electricity on the basis of their vote bank.

"When SP-BSP was in power, they would distribute electricity on the basis of their vote bank," Modi said while attacking the SP-BSP alliance in the state.

Modi said that poll-bound Chandauli is voting BJP because people feel that the BJP offers a strong and stable government.

Thirteen parliamentary constituencies of the state will go to polls on May 19 in the seventh and last phase of Lok Sabha elections. Results will be announced on May 23.