India   Politics  16 May 2019  Nobody can take away Kashmir from India till BJP is alive: Amit Shah
India, Politics

Nobody can take away Kashmir from India till BJP is alive: Amit Shah

'Omar Abdullah said that Kashmir should have a separate Prime Minister. How can a country have two Prime Ministers?,' Shah asked. 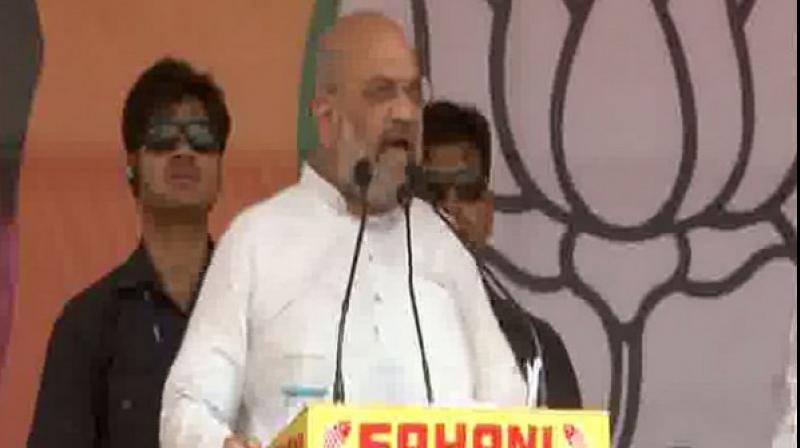 Shah said that Congress was thinking of removing sedition law which the BJP would never allow. (Photo: ANI)

Ballia: BJP President Amit Shah on Thursday asserted that whether the BJP government stays or goes nobody can take Kashmir away from India till party leaders are alive.

"Omar Abdullah said that Kashmir should have a separate Prime Minister. How can a country have two Prime Ministers? These people want to separate Kashmir from India. Rahul Gandhi and Omar Abdullah should know that Kashmir is India's inseparable part and till the day BJP's leaders are alive, nobody can take Kashmir away from us. Reinstate Narendra Modi as our PM and we would remove article 370," he said.

Shah said that Congress was thinking of removing sedition law which the BJP would never allow. "Congress says sedition law will be repealed. People like Zakir Naik who kept spreading terrorism have run away from the country fearing PM Modi.

He says that he will return when a Congress or Gathbandhan government comes to power. We challenge him to set foot on Indian shores; if he does, we will surely put him behind the bars," he said.

He appealed the people of Ballia to not vote for development but vote for national security. He said, "Rahul Gandhi's Guru Sam Pitroda said that attacks like Pulwama happen all the time, why were air strikes required? We said that if you want to appease terrorists, you do it but we would never forgive those who disrupt peace within our borders. If Pakistan fires a bullet, we will surely bomb them."

He spoke about the development initiatives of the BJP government. "Eight crore households have got toilets, 2.5 crore houses have been made for the poor and 2.35 crore people have got electricity for the first time in their houses. Under Ayushman Bharat Yojana, 50 crore people have got the facility of getting upto Rs 5 Lakh for treatment of serious diseases, free of cost," he said.

He appealed to the people of Ballia to vote for BJP. "We will make Uttar Pradesh the number 1 state in India with the help of Modi-Yogi jodi," he claimed.

Elections to 484 constituencies stand completed in the first six phases. The remaining seats amounting to 59 would go to poll on May 19 in the final phase of the elections. The counting of votes will take place on May 23.