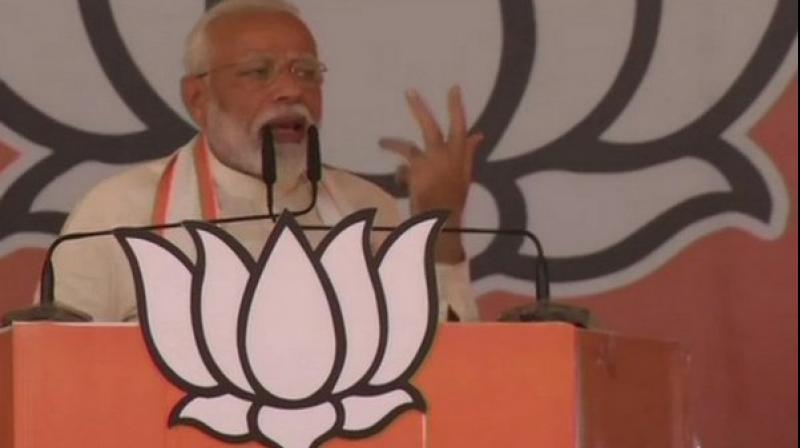 The Prime Minister opined that he expected Mayawati to slam Mamata Banerjee over the latter terming people from Uttar Pradesh and Bihar as 'outsiders'. (Photo: ANI)

Mau: Narendra Modi on Thursday launched a blistering attack against Mamata Banerjee by stating that she has no belief in the elected Prime Minister of India and said he had to leave the stage at a rally in West Bengal due to "TMC hooliganism".

Modi also promised to build a grand statue of Ishwarchandra Vidyasagar at the same spot where the old one stood before being vandalised on Tuesday.

"Mamata didi has no belief in the Prime Minister of India who is democratically elected by 130 crore people of the country. She believes in Pakistan's Prime Minister but not in the Indian one," Modi said.

The TMC and the BJP have been locked in a bitter fight with every phase of the national elections in West Bengal witnessing clashes between workers of the two parties. At his rally, Modi said he had to leave the stage due to "hooliganism" of TMC workers.

"I remember the hooliganism of TMC during my Paschim Medinipur rally. In the state's Thakurnagar, the situation became so bad that I had to stop my speech in between and leave the stage. I have been observing Didi's (Mamata Banerjee) behavior since long, but now the country is also seeing it," the Prime Minister said.

Modi again accused Mamata's party of violence during Amit Shah's Kolkata road show and said his part is committed to vision of Ishwar Chandra Vidyasagar. "Similar hooliganism by TMC workers was again on display during Amit Shah's roadshow in Kolkata, they vandalized Ishwar Chandra Vidyasagar's statue. We are committed to Vidyasagar's vision and will install his grand statue at the same spot," he said.

The Prime Minister opined that he expected Mayawati to slam Mamata Banerjee over the latter terming people from Uttar Pradesh and Bihar as "outsiders".

"Seeing the way Mamata Didi is targeting UP-Bihar Purvanchal people, calling them outsiders for her politics, I thought Behen Mayawati will surely slam Mamata Didi, but this did not happen because she isn't worried about people," he remarked.

He tore into the SP-BSP-RLD alliance by alleging that they want a weak government at the centre to hide their own failures.

"Country knows the truth of 'mahamilavat' (highly adulterated) people since day one. Everyone knows that removing Modi was just a fake excuse while their main target is hiding their own corruption. They wanted a weak government which can be blackmailed as per their own wishes," he said.

Citing a recent scuffle between SP-BSP workers Modi said the alliance was forged without an idea of ground realities.

"SP-BSP made a deal sitting in AC rooms of Lucknow, these leaders are cut-off from ground-realties and forgot about people's welfare. This is why their party workers are still attacking each other," said Modi.

Modi again cornered Mayawati over the rape of a "Dalit daughter" in Alwar and said that the BSP supremo did not take any action in the matter despite being in government with the Congress in Rajasthan.

In an apparent reference to BSP candidate from Ghosi parliamentary seat in Mau district, Atul Rai, Modi asked Mayawati how she will campaign for such a candidate.

Rai is absconding after being booked in a rape case by Varanasi police. SP-BSP have, however, alleged that the case is politically motivated.
Modi is scheduled to address a total of five rallies today, three in Uttar Pradesh and two in West Bengal.

Mau, along with 12 other parliamentary constituencies of the state, will go to polls on May 19 in the seventh and last phase of Lok Sabha elections.