The saffron party is yet to declare candidates from Bhopal, Indore, Vidisha, Guna and Sagar in the state. 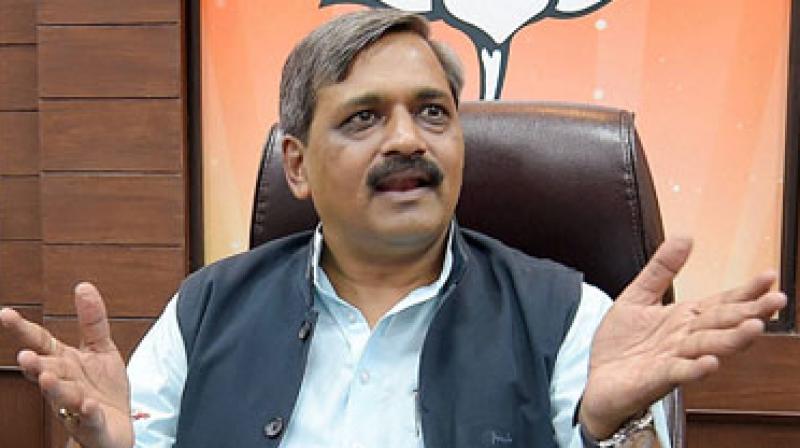 Delhi BJP Chief Satish Upadhyay was talking to the media after attending a meeting of the BJP's state election management committee. (Photo: PTI)

Bhopal: Former Delhi BJP chief Satish Upadhyay claimed Tuesday that despite the bickering between the Aam Aadmi Party and the Congress, the two parties will form an alliance for Lok Sabha polls in the national capital.

The Congress and the AAP were fooling people with their allegations against each other, he said. "I feel both the AAP and the Congress are fooling people by levelling allegations and counter-allegations. Ultimately they will contest the elections in alliance," Upadhyay, joint in-charge of the BJP for Lok Sabha polls in Madhya Pradesh, told reporters. He was talking to the media after attending a meeting of the BJP's state election management committee.

The saffron party is yet to declare candidates from Bhopal, Indore, Vidisha, Guna and Sagar in the state. Upadhyay claimed that the BJP will win all the seven seats in the national capital.

"The AAP had formed government in Delhi with the Congress' support earlier too," he said, adding that the AAP's national convener Arvind Kejriwal had once said he would never form government with the Congress support, but he later did a U-turn. "Both parties are involved in a friendly fight," he said. However, the people of Delhi will not be fooled by them, Upadhyay said.

Earlier Tuesday, the Congress said it had shown a "big heart" by agreeing to form an alliance with the AAP in Delhi, and the ball was now in the court of the Kejriwal-led party.

A day earlier, Congress president Rahul Gandhi and Kejriwal had indulged in a public spat over the issue.