The rally turned into a massive show of strength for Dhinakaran as thousands of his supporters and cadre turned at the venue. 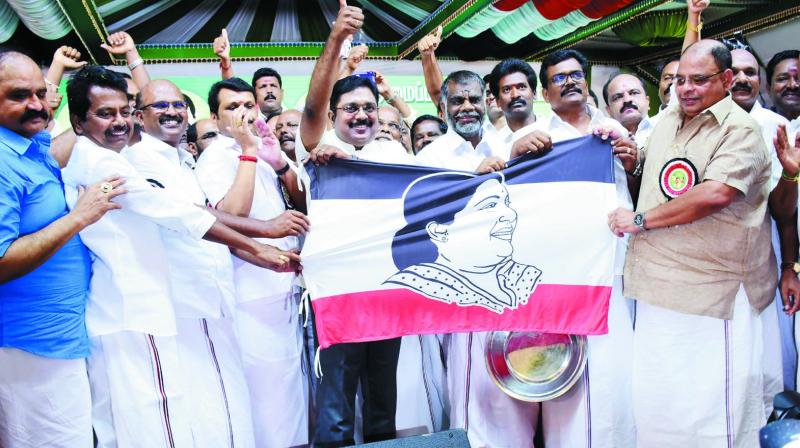 MADURAI: Seven months after he was expelled from the ruling party, rebel leader T.T.V. Dhinakaran on Thursday floated his own outfit, Amma Makkal Munnetra Kazhagam, here and vowed to retrieve the “great movement of AIADMK” from “betrayers and traitors”.

Choosing Madurai, where he officially announced his rebellion against chief minister Edappadi K. Palaniswami and deputy CM O. Pannerselvam in August 2017, to launch his political party, the R K Nagar MLA also unveiled the outfit’s flag which has former chief minister J. Jayalalithaa’s image embossed in the centre. By including the word Amma — meaning mother that became synonymous with Jayalalithaa – Dhinakaran, political observers say, has sent out a clear message to his detractors within the AIADMK that he would always stake claim for Jayalalithaa’s legacy.

“After having consulted Chinamma (V. K. Sasikala), I am announcing the name of the party — Amma Makkal Munnetra Kazhagam – under which we will continue to function. From today, we will function with this name to retrieve the great movement of AIADMK from traitors and betrayers. The Amma Makkal Munnetra Kazhagam will capture power in Tamil Nadu,” Dhinakaran said at the public rally in Melur here. The rally turned into a massive show of strength for Dhinakaran as thousands of his supporters and cadre turned at the venue. 22 MLAs, including 18 who were disqualified by the Speaker, owing allegiance to Dhinakaran attended the rally. Mr Dhinakaran, who won the R K Nagar Assembly by-elections as an independent candidate, had moved the Delhi high court seeking allotment of pressure cooker — which was a rage in the byelections — for his party.